The war was never over for United States Special Forces soldier John J. Rambo. Whether being tortured in Vietnamese prison camps or hunted down in his own country for crimes he didn’t commit, Rambo was always engaged in combat. For impersonator/lookalike Wayne Scott, life has a different set of concerns. The only battle he’s fighting is a homoerotic battle on the dance floor! Say hello to July’s Deadbeat-Of-The-Month, Fake Rambo. 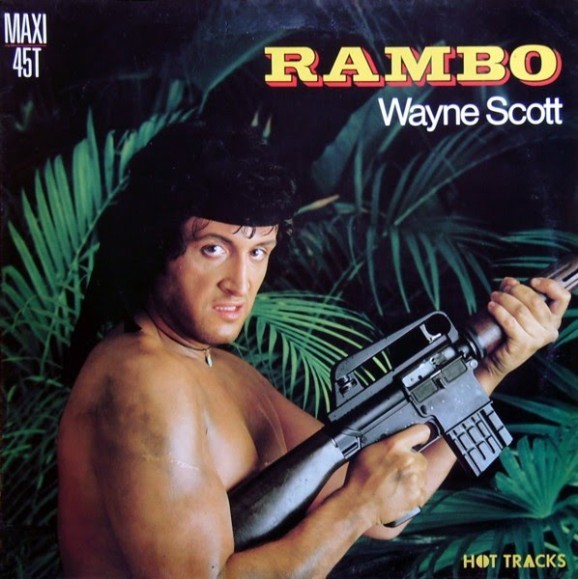 Required viewing before proceeding (audio is poor so turn it way up):

In the video, Wayne Scott presents himself as a nice enough guy. Almost too nice. He also claims to have known both Frank and Sly Stallone. I don’t believe any of it. This guy is dripping with sleaze. In a world full of imposters, impersonators, phonies and gimmicky people trying to earn a buck off someone else’s career, Fake Rambo takes it to a completely different level because of one thing…ITALO DISCO.

It all started when he looked in the mirror one day and saw his future staring back at him. The droopy face, puffy hair and tanned skin genetic talent he came into this world with was too good to pass up a hot gig like being a shitty, disco rendition of a cinematic American war hero. Wayne Scott holds true to the old statement that “the saddest thing in life is wasted talent”. So in the midst of (real) Rambo’s franchise success he runs into an out-of-work, Italian disco troll in a damp alley and hires him to produce his single and direct the performance video for “Rambo (This Time We’re Gonna Win)”. Here’s what happened…

The result is a poorly-choreographed video featuring Fake Rambo dancing, lip-syncing and thrusting his fully-automatic weaponry to a room filled with…no one. Well, only a frantic Chinese delivery guy posed as a Viet Cong enemy that Fake Rambo met outside in the parking lot. I’ll admit it, I love this fucking guy. His current whereabouts are unknown but I expect with Stallone’s recent comeback that we’ll see our chosen deadbeat making a big return this year with disco hits for Cobra, Over the Top and Nighthawks.

9 Comments on “JULY’S DEADBEAT OF THE MONTH: FAKE RAMBO.”