It’s 2019 and a brand new RAMBO movie is just a mere few days away from existing. Everyone needs to stop complaining, whining and being offended by every day things in life because we have so much to be thankful for…like for instance the 73 year old unstoppable force known as Sylvester Stallone brutally slaying what hopes to be hundreds of drug cartel savages in Rambo: Last Blood.

It’s been 37 years since the American action classic First Blood rocked our souls. The original film was about a man pushed until he wouldn’t be pushed any further. Not just a man, but a green beret war hero from Vietnam who returns home to the USA to find himself lost and having no one to trust except his 15″ hunting knife. A man who’s been trained to ignore pain, ignore weather, to live off the land, to eat things that would “make a billy goat puke” as stated by Colonel Trautman. It’s a movie that is equally effective and relative in 1981 as it is today.

The sequels that followed were less meaningful, but more explosive and big-budgeted with highlights such as the exploding head guy that Rambo shot with one of his explosive arrow tips at in Rambo: First Blood Part II.

After a long break from the trilogy, John James Rambo returned in 2008 in the film simply titled Rambo, which I believed to be another blockbuster achievement in the film franchise. Sly and his disciples did a fantastic job bringing the character back to life after such a long hiatus of John living in Thailand, making a crappy living being a snake catcher and providing boat rides across the river.

254 was the number of confirmed on-screen kills by 62-year old John Rambo in Rambo IV. LOOK AT THIS SON OF A BITCH.

Now in 2019, in a mission to save his daughter from the Mexican drug cartels, this senior citizen war machine is back in Rambo: Last Blood. Such a perfect title. Go see it this Friday and report back to Uncle T!

Before we part ways, let’s examine some of pop culture’s more strange fascination with this character through the decades. Rambo has been portrayed by actors in TV/movies such as Elvira: Mistress of the Dark, The Simpsons, Hot Shots! Part Deux, “Weird Al” Yankovic’s UHF and many other notable appearances.

Let’s dig into some of the less remembered, more bizarre tributes…

DISCO RAMBO! This song is actually pretty great. Apparently the character made a big impact on the European disco scene in the mid-1980’s, because this it’s actually 1 of 2 different tracks that tribute the man…

ANOTHER DISCO RAMBO! A few years ago TNUC published a monthly saga called “Deadbeat Of The Month”. One of our chosen deadbeats was “Fake Rambo”, a Rambo impersonator named Wayne Scott who released an Italian disco record in 1985. More on that here https://uncletnuc.com/2014/07/08/julys-deadbeat-of-the-month-fake-rambo/

BLACKIE LAWLESS OF W.A.S.P.! Even the iconic lead singer was portrayed on a very hot slice of tour merchandise which goes for a pretty penny on eBay these days. This makes sense because Blackie was into EVERYTHING COOL back in the day like Rambo, the Ghoulies movies and The Dungeonmaster! 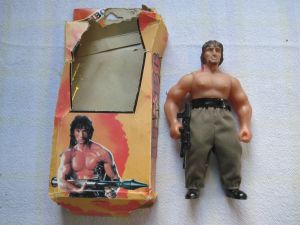 CRAPPY BOOTLEGS! In the United States, Rambo: The Force of Freedom was a popular kids television show based on the films and naturally like all animated shows, a toy line was created. In several other countries, bootlegs were created which made for some amazing disasters as pictured here. Sculpting Stallone’s facial features had to always be challenging even for the most skilled of artists, but these knock offs are another level. He constantly looks like someone just hit him in the head with a shovel.

HALLOWEEN MASKS! Last year Uncle T picked up one of these terrifyingly detailed and realistic Rambo masks which hail from 1988. We took to the woods with the mask to capture Rambo in his most comfortable territory. Watch the video. 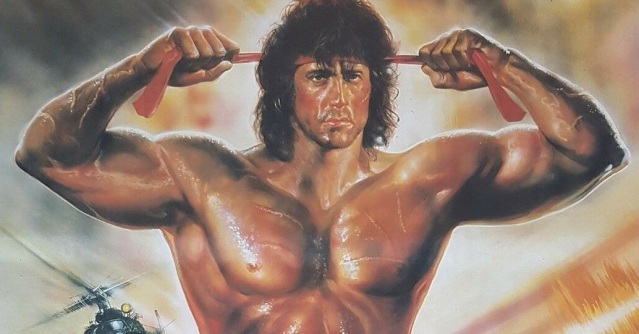 In all seriousness, I hope Rambo: Last Blood gives the action movie genre a much needed kick in the ass. The horror and sci-fi genres will always have a huge supporting community, but these explosive blockbusters don’t get enough respect. Although we need some new blood to step up as well, Stallone at 73 years old still doing what he loves is just fucking cool. The action hero really doesn’t exist anymore, and please I’m not talking about comic book people with capes. I miss the oiled up, long-haired, 1-man army war machines that didn’t say much, loved America, always looked pissed, hung out of helicopters with one hand, fired off rocket launchers with ease, ran around to pulse-pumping soundtracks, ate sandwiches, wore lots of denim and made women melt.

Unfortunately like all the greats, Stallone won’t be around forever. Now go show some respect and see Rambo: Last Blood!

← PATRICK SWAYZE OWNED A DELOREAN.
COMING FOR YOU. →