There’s a sub-genre in the heavy metal community that we at the Land of TNUC like to call Beef Metal. Within this genre, musicians and performers cite a number of influences who they’ve looked up to for guidance, from usual guitar heroes like Eddie Van Halen to muscled warrior types like Conan the Barbarian, He-Man, Ultimate Warrior and Rambo. Forge these icons together, then sprinkle some Androgenic-Anabolic Steroids, HGH (human growth hormones), synthol, tanning oil and meat sandwiches and what you get is a molten mass of specimens made up of iron and brawn called Beef metal.

Who’s this? Another Rambo rip off? No, we already covered that over here. Say hello to Beef Metal’s hottest export and December’s Lost-Legend-Of-The-Month, Kane Roberts!

It all began in 1986 when Alice Cooper needed a certain heavy metal gorilla to join his band to achieve a heavier sound he hadn’t tapped into before. Enter Kane Roberts. The guitarist not only brought a new heaviness to the band but added a theatrical element on stage due to his action hero physique and machine gun/rocket launcher guitars. After playing and co-writing songs for Alice’s Constrictor album, Kane joined the band on the road for “The Nightmare Returns Tour” which also included Kip Winger playing bass, pre-Winger.

Kane and Alice on stage.

Roberts co-wrote some of Alice’s biggest hits during that era, including everyone’s favorite hit, ‘He’s Back (The Man Behind the Mask)’ from the Friday the 13th Part 6: Jason Lives soundtrack. He continued with the group for the Rase Your Fist and Yell album & tour, meanwhile landing acting roles in John Carpenter’s Price of Darkness and Wes Craven’s Shocker, the latter which he also contributed vocals on the film’s soundtrack. After this three year run, Roberts released his first solo album, simply titled Kane Roberts which displayed him posing on the cover in a dark alley with his machine gun guitar, surrounded by helicopters. The album fully capitalized on themes of sex and power that naturally one should expect from a heavy metal barbarian like Kane. His vocals are equally as impressive as the guitar playing, with Kane switching from banshee-like screams to AOR melodic crooning. Track titles from the album include ‘Rock Doll’, ‘Full Pull’, ‘Triple X’, ‘Gorilla’ and ‘Women on the Edge of Love’. The music video for ‘Rock Doll’ summarizes the decade’s excess and over the top hi-jinks in 4 ravishing minutes. Enough talk. Just watch.

ROCK DOLL! Is this guy great or is this guy great? My favorite line in the song is “A METAL HEART PUMPIN’ LACE AND CHROME!” I don’t know what’s more inspiring, the nonstop close-up shots of audience members thrusting or Kane violently molesting his guitar on stage. The pinnacle moment is when he just about explodes into a sexual tyrannosaurus right after his guitar solo around the 3:22 mark. First he grunts something into the mic that only a neanderthal would understand, then while pumping and thrusting around the stage like a untamed beast he reaches out to a girl in the front row and picks up by her shirt with one arm. It’s all just too good. God bless the director and crew for capturing this moment. They deserve an award. Oh, and if you think the track sounds like a Winger song on steroids, it should because Kip Winger plays bass on the album, so all that’s missing in the video are Kip’s spinning kick pirouettes. Can you imagine him and Kane spending a night on the town? We could write 5,000 words just on that itself. 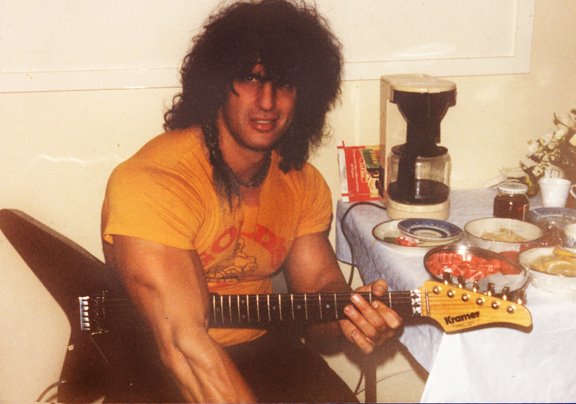 As I sit here devouring the last shreds of meat from the carcass of this year’s holiday turkey, I can think of no better man to close out our Lost-Legend-Of-The-Month feature than Kane Roberts. It does beg the question of how he finds time to practice guitar, singing, songwriting AND working out. Only rock’s chosen warriors would be able to answer that, but I suppose his schedule probably went something like this: Monday = Chest/Riffs/Triceps, Tuesday = Back/Vocals/Biceps, Wednesday = Riffs/Shoulders/Bicep Superset…and so on….

He stormed through the early nineties appearing on albums by Rod Stewart, Kiss, Desmond Child, Berlin, Steve Vai and others. After releasing his 2nd studio album Saints and Sinners in 1991, the misplaced viking took a long break from music and ended up leaving the industry to focus on his new endeavor: graphic arts and video game programming. Only in the past few years has he been showing up to jam with his friends like Alice and Kip.

**[DISCIPLES: Thanks for sticking around month after month to read about these Lost Legends. Hopefully you’ve enjoyed our feature and maybe even gained some knowledge. Now TNUC asks…what would you like to see in 2016? Please respond in the comment section below! As always, the Lost-Legend-Of-The-Month heart-wrenching chronicles will always be available at this location.]**

4 Comments on “DECEMBER’S LOST LEGEND OF THE MONTH: KANE ROBERTS.”