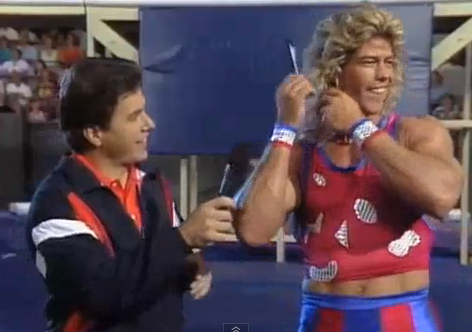 One could safely say that 2015 was truly the YEAR OF MALIBU. Between the ex-American Gladiator securing a Lost-Legend-Of-The-Month position for May and conducting a 1-on-1 interview with the self-proclaimed “child of mother nature”, it was truly a banner year at the Uncle T household.

If you’re one of those hellbent, fire-breathing, mental TNUC supporters, you’ll remember that back during this time we sent a team of archaeologists, scientists and Japanese guys in lab coats on a mission to discover if Malibu had popped up in any other films, TV shows or commercials during this era. What we found was astronomical. In a feature called “MALIBU SIGHTINGS”, it was revealed that he made appearances in such things as Elvira’s Mistress of the Dark, the 1993 Michael Douglas thriller Falling Down and even as a male stripper-policeman in a classic episode of Married With Children.

2016 on the other hand has been quiet in the land of “twisted steel & sex appeal”…UNTIL NOW. Just when frantic Malibu disciples thought there couldn’t possibly be any other instances with the guy appearing out of nowhere, brace yourself for a sighting like no other…

Malibu…donning short hair and welding in a room full of pink fog? Yes folks, prior to the viscous mane taking form and long before getting beaten in every American Gladiators competition, the artist known as Malibu starred in the Chippendale’s home video “Tall, Dark & Handsome”!

Take a second to absorb this factual information.

First of all, there’s no excuse for not putting the big ‘Bu on the video’s cover. My only guess is that he slept through the photo shoot after drinking too many Pina Coladas and gorilla-stomping down the beach all morning.

Since the video is readily available on YouTube, I thought about providing time slots for every Malibu appearance simply for reader’s convenience, but that seems a little weak. So for those of you willing to look beyond the banana hammocks and soapy butts, LET’S DO THIS.

WARNING: If you suffer from fears concerning your own masculinity, or a family member walking into the room and catching you watching a exotic male dancer video from 1987, you’re probably not tough enough for Tall, Dark & Handsome. 100% your loss…

While the feathered hair without question pushes lethal levels to the limit, the music in this video is downright SCORCHING. Any self-respecting TNUC fan will agree that these killer songs could fit comfortably on any of Stallone’s flawless run of soundtracks. It’s almost like someone studied the vocal stylings of Robert Tepper, John Parr and Jami Jamison, pumping out motivational workout rock which automatically puts people like us in the greatest state of mind.

Most frequent themes of the songs heard in the lyrics are “fires burning”, “passions burning”, “sensations” and “temptations”. I’m surprised I didn’t hear any of the singers say “in the heat of the night”, a phrase so commonly used during this era that I hear it almost every day on one of the TNUC mixtapes. 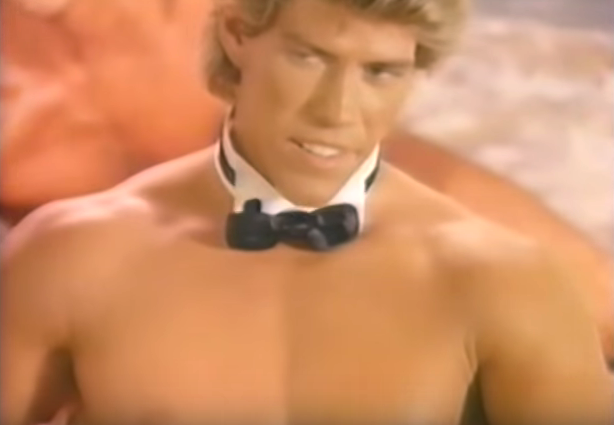 Within minutes of watching the first scene I realized something. These sweaty buff pumpers and Uncle T are basically cut from the same cloth. Long, ferocious lion’s mane? Check. Mega tanned Neanderthal skin? Double check. A California-strut which could only be soundtracked by gyrating guitar riffs behind some proud eagle vocals? Triple check.

Malibu gets the most screen time playing a welder during the construction site segment “Hot to the Touch”. The scene features construction workers pretending to sledgehammer things, climb through foggy manholes and creep around while making sexual faces, forgetting they have work to do. The scene ends with a girl waking up because the sultry jobsite was sadly just all a dream. Do ladies still fantasize about construction sites in 2016? I HOPE SO. Would be awfully sad if that was a thing of the past.

Malibu, you’re the fucking man.  I can’t wait to see where you show up next. Baywatch? Double Dare? Rescue 911?

6 Comments on “ANOTHER MALIBU SIGHTING.”