THE ONE THAT GOT AWAY.

It’s time Uncle T tells the sad story of how he was 99.9% close to being the proud owner of a 15-foot, ceramic grim reaper head from “America’s Horror Theme Park”, the original Spooky World.

If you’re a regular around here, than you’ve had to put up with Uncle T’s constant babbling about the old haunted house attraction in Berlin, Massachusetts known as Spooky World. I’ve written about this place more times than is necessary, this I fully admit. But just when I think there’s absolutely nothing else to say, I’m pulled right back into its vortex. I promise this time it’s a doozy of an update.

Quick recap. For those of you not familiar with Spooky World, check out article #1, continue to article #2, then report back here. In a nutshell, a little place way out in rural Massachusetts called Spooky World was doing the haunted house/haunted hayride/horror show thing before it became a big deal (and big business) in just about every state in America. These days it’s hard to imagine these places not existing during the Halloween season, but this was the late eighties/early nineties. Adults and kids loved a good scare, horror icons were huge, and they all flocked to one place for that “big” feel: Spooky World.

In the height of it’s popularity, the original location was shut down for different reasons depending on who you talk to. Spooky World moved to new locations, then years later it was bought out by other haunters, but the charm and thrill of the old barn in the town of Berlin was long gone.

These days, now that TNUC is firmly nestled in New England, he “checks in” every few months on the old property grounds, just to be sure it hasn’t burned to the ground or something. It eases his mind seeing the old demons and gargoyles still airbrushed on the barns. That giant reaper mascot still hovering over a doorway for 30+ years…

Ah, that grim reaper. The gargantuan-sized, symbol of Spooky World is such a sight to behold. I’ve always admired how it has withstood over 30 years of harsh New England winters and still looks just as deadly! What a crime it would be if it was demolished for some dumb reason. I knew it would eventually probably happen. I had to try and get it.

I finally got in contact with the current property owner after staking out the place and seeing a few work trucks parked on the lot. Come to find out, a nice contractor guy uses one of the garages for landscaping equipment storage. This was my chance.

My plan was to speak with him about potentially taking that giant symbol of death looming over his garage off his hands. Or at least make him a proposition. After a briefly awkward phone conversation, he agreed to meet and give me an offer.

As a certified freakazoid and self-proclaimed historian of Spooky World, I was beyond ecstatic. THIS THING IN MY BACKYARD is all I could imagine. Plans were already made in my mind about getting a flatbed trailer for hauling it down the highway to my house. The owner and I agreed to meet on a Sunday.

I pulled up into the driveway at the property and we exchanged hello’s. He asked me to wait a couple minutes because he was speaking with a couple of his workers. I meandered around the barn to where the reaper was and saw that suddenly it wasn’t in its regular spot, attached to the garage. This took me off guard but I figured maybe they got a head start and detached it already. I turned around and saw the owner walking up towards me with a puzzled look on his face. He acted shocked that the reaper was gone and began asking his employee what happened. The guy explained in broken English that during renovation work around the building they demolished it because it was rotting and falling down. The owner appeared to be as surprised as I was, telling his employee that he wasn’t supposed to do that because a guy (me) was there to pick it up.

My blood was boiling. I saw red. I probably looked like Junior from Problem Child during one of his rage-out temper explosions. Shocked and at a loss of words, I revved up a nearby chainsaw and went running after them.

Kidding aside, I couldn’t believe it. The ridiculous truth of how close I was to getting this thing, and after 30 years of it being in this same location, now OUT OF THE BLUE it was destroyed and in pieces.

I’m highly suspicious of this incident. Everyone I tell this story to is highly suspicious. How on earth does this thing survive all those seasons, for all those years, then suddenly when someone shows interest in obtaining it, it’s gone! Something ain’t right. But then again, why would this seemingly nice contractor have me commute over an hour to make an offer on it?

I’ve vented all I could vent. Now I’m angry again from just telling the story. Even though part of me thinks this is a conspiracy of some kind, the guy did give me a few original metal signs. They don’t take the place of this once in a lifetime artifact from my childhood and pinnacle of nostalgia, but they’re pretty cool. 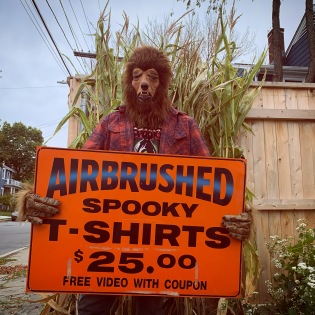 Because I won’t let this rain on my October, and since Halloween is coming up, maybe I’ll round up a few hooligans to perform a seance at the old property. A punker, a handicapped jock, a cheerleader, a nerd, one loud slob and Uncle T. Maybe together we can conjure some stormy weather, get a lightning bolt to strike down on the crumbles of grim reaper and resurrect that bad ass son of a bitch to rain some hell.

If you’d like to know more about Spooky World and why TNUC never stops singing its praises, I encourage you to read our prior articles. Also check out the home video from 1994 which was produced by special effects legend Tom Savini and features Kane Hodder (Jason Voorhees), Linda Blair, Elvira and more!

4 Comments on “THE ONE THAT GOT AWAY.”