CRAZY FROM THE HEAT. 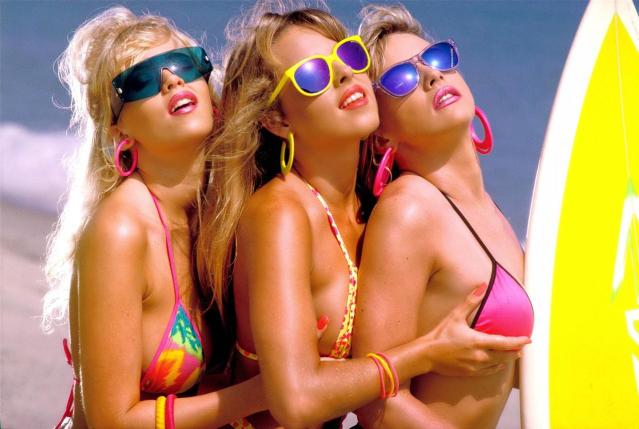 If you live a lifestyle anything like the TNUC lifestyle, it means you STILL spend a wealth of your time shirtless air-guitaring on the couch and watching music videos.

Everyone knows when a David Lee Roth music video comes on, it’s like being treated to a mini-movie. His productions were some of the most over the top, innovative, bizarro music videos to ever hit MTV airwaves. I can’t be the only one who’s ever sat and marveled at the idea of a real DLR movie actually existing…

Well folks, Guitar World rocked the TNUC universe recently with the shocking revelation that during the summer of 1986 we almost really had a full blown theatrical film called Crazy from the Heat, starring Diamond Dave himself!

The article is too heavy to reiterate, so here it is straight from Guitar World:

By the fall of 1985, David Lee Roth had seemingly put the breakup of Van Halen in his rearview mirror.

Hoping to capitalize on his MTV-driven video stardom, Diamond Dave now set his sights on the big screen.

Along with his creative partner and manager Pete Angelus and writer Jerry Perzigian, Roth wrote a screenplay entitled Crazy from the Heat. Angelus and Roth then sold it to CBS Theatrical Films, secured a 10 million dollar budget, and camped out on the CBS movie lot in Burbank to do pre-production for the musical comedy. Angelus recalls, “I was going to direct it and Dave was going to star in it.” If all went according to plan, Crazy would hit theaters in the summer of 1986.

But in early November, just days before they would begin shooting, the phone rang in their studio offices. It was Roth’s attorneys calling to deliver some terrible news. CBS, facing serious financial woes, had shuttered its film division, leaving Angelus and Roth without a means to make their movie. Angelus says, “When we put the phone down, I remember we were both kind of speechless for a moment. We’d spent the better part of a year preparing for that film. We’d done the casting. We’d done the location scouting. We’d been working with the set designers and the wardrobe people. We were fully into it and fully prepared.” At that moment, it appeared all their work had been for naught.

This setback seemed tailor-made to trigger a crisis of confidence for Roth. He’d trumpeted his movie plans in the press throughout the summer past, previewing a bikini-packed plot that would see rock star Roth squaring off against his greedy manager while on an island vacation. He’d minimize the challenges inherent in filmmaking, declaring on the David Brenner Liveshow that both starring in and making a film was the “next logical step” after his success with video. “It’s the same thing…except our movies have been three minutes and twenty-eight seconds. So now it’s time to just bump it up to 90 minutes.” But now it seemed unlikely that his movie would ever arrive in theaters.

Meanwhile, Roth’s former bandmates in Van Halen had seemingly suffered no ill effects from his summer 1985 departure. They had a new blond-maned, leather-lunged lead singer, Sammy Hagar, and had begun work on the follow-up to their multi-platinum smash, 1984. Roth also had to live with the fact that Eddie Van Halen, who’d told Roth in the spring of 1985 that he had no interest in scoring Crazy because the guitarist expected the film would “probably stink,” seemed to have made the right decision after Roth’s deal disappeared.

The article goes on to explain that in the months that followed, Roth remained aggressive and re-emerged with a band lineup made up of heavy metal virtuosos Steve Vai, Billy Sheehan and Gregg Bissonette. The band would of course eventually release the chart-topping album Eat ‘Em and Smile and crush MTV with two massive hit videos, “Yankee Rose and “Goin’ Crazy”, all built upon the creative foundation Roth had laid down for the now abandoned Crazy from the Heat screenplay. Back to the article…

Bassist Billy Sheehan likewise remembers that as filming drew closer, the tunes they wrote soon made their way into the script. “I know songs like ‘Goin’ Crazy’ were going to be integrated into the movie somehow. I remember reading the dialogue in the movie, and there were a lot of scenes with the band.” These musical scenes included a concert performance of “Shy Boy” and a nightclub scene that featured Roth crooning his way through Sinatra’s “That’s Life.” 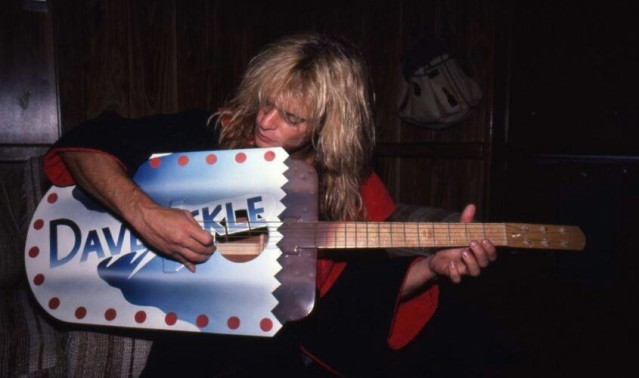 Diamond Dave playing the ‘Davesickle’, a steel-stringed electric acoustic guitar shaped and painted like a popsicle.

All of this planning and scheming, however, came to a standstill on that fateful November day when CBS pulled the plug. Angelus says that after the initial shock dissipated, they began discussing their options, asking each other: Apart from litigation against CBS for breach of contract, what’s our next step? Sheehan recalls telling Roth that day, “ ‘The hell with it. We’ve got a band. We’ve got songs. Let’s go out and tour!’ Not that he already didn’t think that, and not that he needed any encouragement from me, but I just remember thinking, I’m ready to play.”

Roth would get clarity about the next moves to make once he, like Sheehan, considered the full breadth of the creative endeavors they all had underway. “The movie was just one part of a whole program,” he explained to Creem Magazine. “Obviously, when the movie fell out, we just continued with the rest of the program.” Angelus observes that what Roth termed “the program” had included “a coordinated release of the film, the [soundtrack] record and of course the tour to accompany it.”

With his film in limbo, Roth and Templeman held pre-production meetings for what would now be a stand-alone rock record rather than a soundtrack album. They decided that the forthcoming Eat ’Em and Smile would include covers and originals, ones that represented a middle ground between the pop flavored, big-band sound of Roth’s Crazy from the Heat EP and the guitar-oriented pop metal showcased on his albums with Van Halen. As Diamond Dave would later say, even though he’d put together a band capable of playing the most technically sophisticated heavy metal, he didn’t want fans of “California Girls” wondering “what happened to the brass on this record? Where’s the saxophone? Where’s the shoobee-doobee-doo-bop?”

With the success of his Van Halen days still raging through the decade and Roth on the brink of something spectacular, I can’t help but fantasize about all the madness that would’ve ensued building up to a Crazy from the Heat movie coming out. Even if the film turned out to be a complete pile of pig slop, the Diamond Dave mania surrounding the film (TV appearances, merchandise and promotional goodies galore) would have been fun to be a part of.

Since everything with this guy was 3,000% bonkers for most of his career, the Crazy from the Heat movie would have been right on that level. The film’s premiere would’ve probably gone down in history books, with bikini-clad girls, zoo animals and rock’s chosen warriors parading the red carpet in mass numbers. Who knows, if the film had been a box office hit, DLR might have moved into a steady acting career. Things have been weirder. Remember when he worked as an EMT on ambulance calls in New York City?