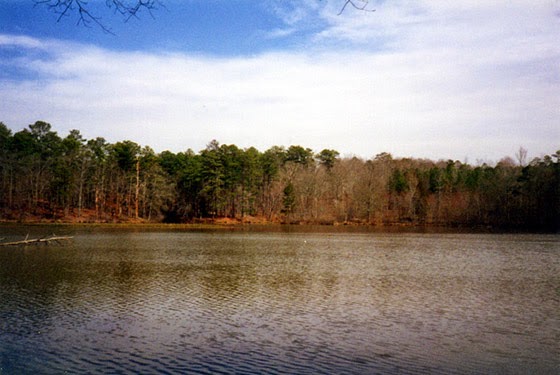 The birds are chirpin’ and the sun is shining. Sunlight glimmers on the cool lake and a soft wind brushes through the maple trees. Canoes align the dock on a shoreline that stretches as far as the eye can see. Camp counselors prepare cabins and set up archery lanes. Dozens of excited youngsters anxiously wait for their buses to turn the corner and arrive at Camp Arawak. Last but certainly not least is the kitchen staff who prepare the daily slop to be serving tables at the mess hall, headed by a burly pedophile cook named Artie!

Please join me in giving a sweaty, butt-stained welcome to our special SUMMER CAMP EDITION of DEADBEAT-OF-THE-MONTH for June, Artie the cook.

This piggish wonder of the world was picked up on our deadbeat radar and comes to us of course from 1981’s Sleepaway Camp. The first sign of Artie’s mega-sleaziness happens the first moment he steps on screen. As the kids arrive at Camp Arawak, he’s seen making a classic creep-pedo-stare as they run to their cabins, while muttering things like “Look at all that fresh young chicken. Where I come from, we call em’ baldies.”…

That’s right, this is by far the furthest we’ve sunken into the depths of depravity for this ongoing feature thanks to this sexual predator lowlife. 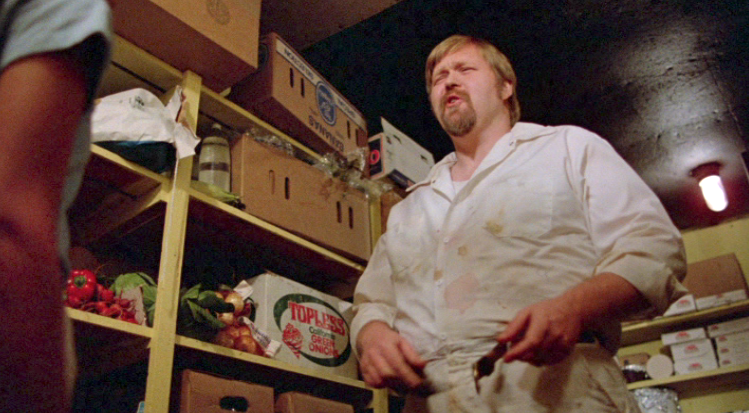 Later that day he lures young Angela into the back food storage area and tells her he has something she’s “gonna like real good”, then proceeds to unbutton his belt. Angela’s cousin and hero of the day Ricky suddenly bursts into the room and interrupts the almost-molestation. The kids run away and Artie heads back into the kitchen, flustered and heartbroken.

Pause! Notice how one of the boxes in the storage room has a label that discretely says TOPLESS and another that says TUBBY. 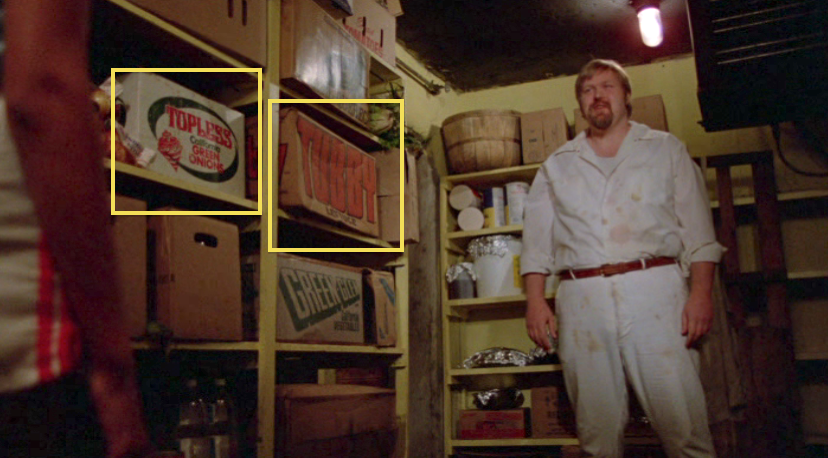 Several minutes later we see Artie cooking corn and standing on a stool over a massive pot of boiling water. Then, the camera pans to a revolting but important extreme-close-up of the dirty stained butt of his pants..

Suddenly a hand appears and begins to pull the step-stool out from below him. Without giving the entire scene away in the event that you still haven’t seen Sleepaway Camp (!?), here’s how our trusty head cook appears during his final moments..

Uncle T highly recommends you pay a revisit to this summer camp classic and pick up the newly restored Blu-Ray/DVD that Scream Factory released a couple weeks ago.

2 Comments on “JUNE’S DEADBEAT OF THE MONTH: ARTIE THE COOK [SUMMER CAMP EDITION].”