THE TALE OF MANIMAL CONSTRUCTION.

The other day while browsing through old photos at Grandmother TNUC’s house, I came across something completely forgotten about over the last three decades. Granny might be senile and quite the haggard old bird, but once in a while she brings back genuine memories from my hazy past.

It was 1989 and times were tough for Uncle T. Not only was he battling through nasty divorces and trying to fix a totaled Lamborghini, but the federal government were inditing him due to the alleged trafficking of cocaine-filled bananas on a cigarette boat through the Panama Canal in ’84. This voyage of the high seas began as the annual, happy TNUC Boob Cruise but swirled into a drug-crazed trip with Uncle T running from mysterious mustached men in leisure suits who wanted him dead. He eventually escaped and returned home.

TNUC realized he needed to stay under the fed’s radar and the idea of starting up a business under a fictitious name crossed his mind. How about construction? In a panic he forged some business documents and created MANIMAL CONSTRUCTION.

Starting a construction company would be no easy feat, but he’d watched a few movies to realize that big burly dudes carrying rebar looked pretty cool, and the idea of heavy metal lunch breaks sitting on giant steel beams 75 stories up in the air looked like pure clean fun. So he posted a few ads in Recycler Magazine looking for party-hardy buff warriors to work for him. After scrounging up all his life savings, MANIMAL CONSTRUCTION was born.

TNUC received a number of phone calls and told the men to meet Monday morning at the new job site. Over the week he sealed a deal with Estate Films, Inc., producers of the popular ‘Rock Video Girls’ home video collection. They needed a new studio built and hired MANIMAL CONSTRUCTION as the low bidder of the job.

My workers showed up as promised and work began right away. Well…after a few morning beers, steroid injections and meatball sandwiches. Safety first! 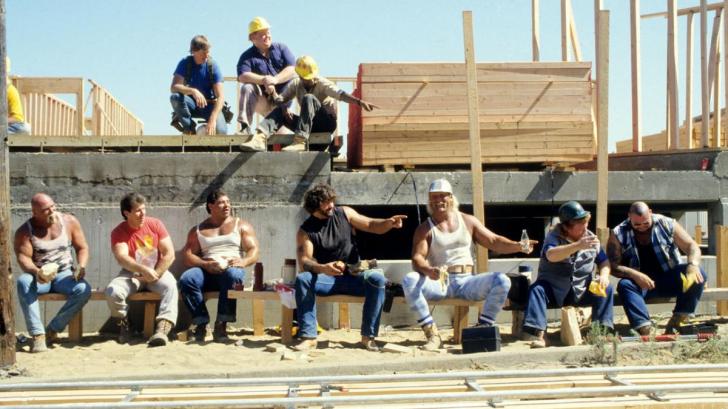 While Uncle T operated the crane, my crew set foundations and poured concrete. I made sure these guys didn’t pass out from heat exhaustion or cramped up, so I had a couple video vixens prowl around the job site and pass out beers and peanuts. It was a great day. I went home at lunchtime to take care of some business at “the office” and figured the crew could handle things on the site. 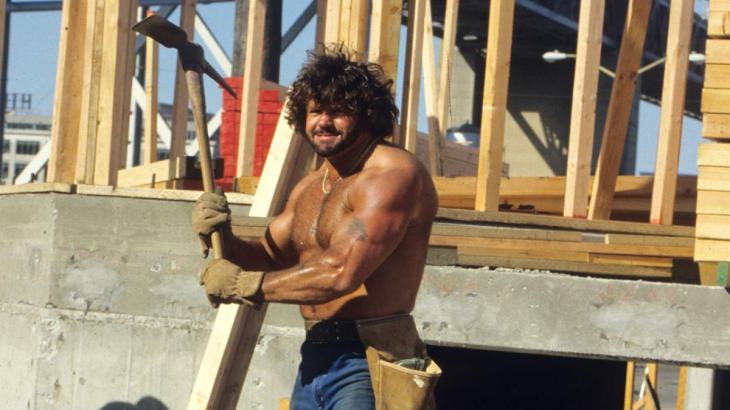 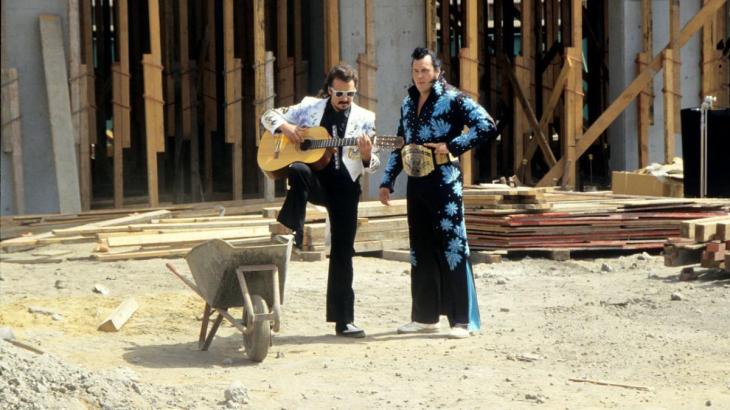 When I returned around 3 o’clock there were camera crews, production equipment, dollies, trailers and craft services. Frantic cameramen rushed around while strange music played over the PA. Even my concrete pump crane had even been transformed into a video camera crane. I flipped out and my emotions got the best of me, smashing 2×4’s over people’s heads.

I’d been used, victimized and made a fool of. They faked being interested in working for my company for some silly video shoot! But I’d be lying if I wasn’t a bit intrigued…

A man quickly approached me and introduced himself as Vince McMahon, chairman of the World Wrestling Federation (WWF). At the time I knew nothing about the wrestling world, so these wrestling “superstars” were complete strangers. Mr. McMahon pulled me aside and offered a grandiose deal that I couldn’t refuse. For my troubles he promised to provide a large sum of money, plus a chance to star in their new music video for a song called “Piledriver” from Piledriver: The Wrestling Album II.

Naturally I took the bait and production for the video wrapped that evening. We never actually finished building anything but my new earnings from the WWF (now the WWE) was more than enough to keep me out of trouble. I also had the unique opportunity to meet with all these wrestling neanderthals who I had originally thought were day laborers. Among the crew were Koko B. Ware, Hulk Hogan, The Honky Tonk Man, Billy Jack Haynes, Jimmy Hart, “The Magnificent” Don Muraco and “Superstar” Billy Graham! Above, watch the official music video for “Piledriver” and see if you can spot Uncle T dancing on a stack of lumber!

So why are we only now sharing this story? Because it’s WrestleMania week! Meaning that WWE’s WrestleMania 33 airs this Sunday on the WWE Network. WrestleMania is the super bowl of the wrestling world and the TNUC lair is currently getting prepared. I realize that not everyone is a fan of wrestling so I hope this story was at least entertaining enough to keep you engaged.

1 Comments on “THE TALE OF MANIMAL CONSTRUCTION.”