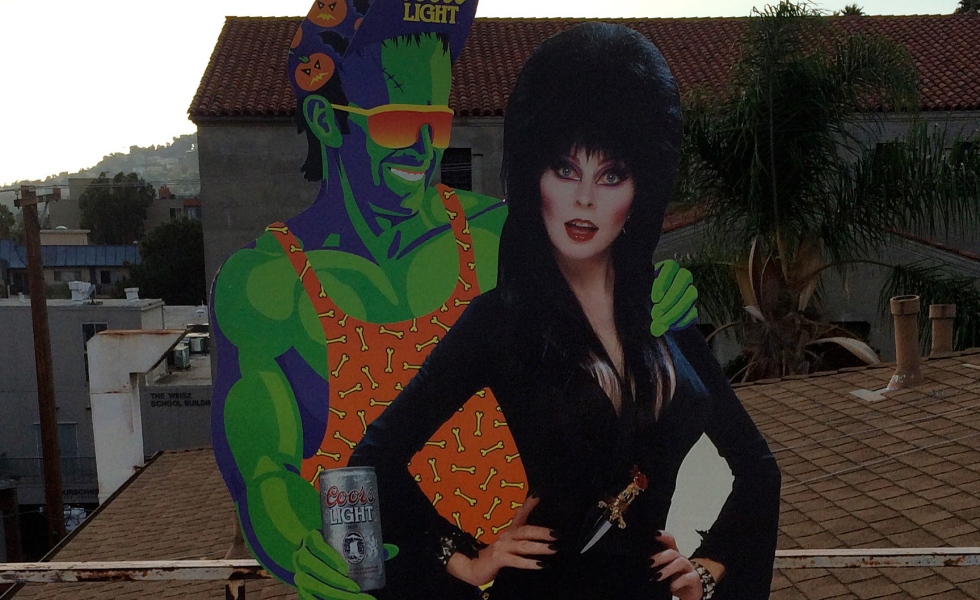 Symbols of Halloween come in all shapes and sizes. For many of us, Elvira and her big beautiful features are ideal representations of this time of year. Whether it be horror-hosting an all-night movie marathon or emerging from the foggy pale moonlight for a sexy photoshoot, the Mistress of the Dark’s contribution to all-things-spooktacular over the past 30 years is without question, legendary.

Well then, who exactly is this cool ghoul behind her on this Coors Light promotional standee??? Ladies and gentlemen, raise those cups of party punch in the air and say hello to our Lost-Legend-Of-The-Month for October, “Mali-Boo” from ‘Elvira and the Party Monsters’!

First appearing in a series of Coors Light commercials during the late 1980’s, the ‘Party Monsters’ were Elvira’s personal group of devoted disciples who danced and partied behind her wherever she went. Each of them represented iconic figures of Halloween, including a wolfman (Beer Wolf), a vampire, a few witches, a mummy and a Frankenstein-inspired character who would soon persevere to greater levels than most of his merry Monsters. (most being the word here. We all know Coors Light’s Beer Wolf would catapult to SUPREME status and certainly needs no introduction here). One of the commercials is set on “Mali-Boo Beach” and features Elvira and her pals hanging out on the beach, soaking up the cosmic rays on their dead flesh. During this scene a Frankenstein character pops up but it’s nothing to make us viewers think he’s anything else beyond some guy they plastered some Frankenstein makeup on.

Gravestone Pizza? Someone order me a large cheese because this place sounds fantastic.

Following the commercials, the gaming company Bally released the ‘Elvira and the Party Monsters’ pinball machine which found popularity in arcade centers, malls, bars and homes of people who could afford it. Again, the stone-cold-stud appeared but was merely a ghoul among other ghouls. However his rise to individual 10-second fame would come soon enough…

KABOOM. Out of nowhere Mali-Boo got his big break in an exclusive photoshoot pairing with Elvira which generated promotional items for liquor/grocery stores like the standee pictured here. Standing crotch-to-butt behind Elvira in a hot-orange “bone” tank-top, purple bat shorts, Daytona Beach shades and pumpkin ballcap, Mali-Boo looked to be in the best shape of his career and ready to rise to fame. Was this sudden push from Coors Light a sign that the company had chosen their new mascot? Were they attempting to chain up Beer Wolf and send Mali-Boo tearing into the 1990’s? Was the evolution of Mali-Boo a natural progression or conscious plan? Before we could unfold the new chapter in this green-teen’s story, he vanished.

Mali-Boo’s continuing legacy remains a mystery. This promising lost legend could have done wonders for the rest of the Party Monsters by paving the way for the rest of them to share the spotlight. (Much like how Count Chocula was the torchbearer for the rest of the General Mills cereal monsters like Boo Berry, Frute Brute, Frankenberry and Yummy Mummy.) It was easy for some people to write him off as a “fill in the spot” Frankenstein character for the Halloween season – but I don’t think the Coors Light laboratory scientists had such simple intentions. Plus, Elvira didn’t just pose with anyone. She’s the Mistress of the goddamn Dark with a reputation to withhold. Her standees are now high-dollar, sought after items and besides a few flying bats and Beer Wolf, the only other person she posed with was this beach bonehead.

Here’s hoping Mali-Boo makes a huge return in 2015/2016. Of course we’d prefer a Beer Wolf return 100x more, but really any of the Party Monsters will do (if done correctly with neon colors and short-shorts). We currently have a team of expert counselors at Camp TNÜC working around the clock trying to speak with a Coors Light representative about the fate of the Boo’. If they completely drop the ball, we’ll be contacting the soft drink company Surge to persuade them into adopting him for their promotions. You disciples will be the first to know if we hear anything.

4 Comments on “OCTOBER’S LOST LEGEND OF THE MONTH: MALI-BOO.”