Keeping up with discussions on all-things-Rocky and Stallone, now is probably a good time to shine a spotlight on the ravishing blonde powerhouse (and no, we don’t mean Ivan Drago).

Mention the name BRIGITTE NIELSEN in a typical crowd and I’m willing to bet the response will be an eye roll, smirk, sigh, the “ugh” sound or a quick chuckle. What those people fail to remember is that for all the wonky choices she’s made in her career and public life, BOY has she made some good ones and MAN do they outweigh the bad! In fact, most of her work (both creatively and publicly) fits right in the TNUC wheelhouse.

Allow Uncle T to break it down into three categories… 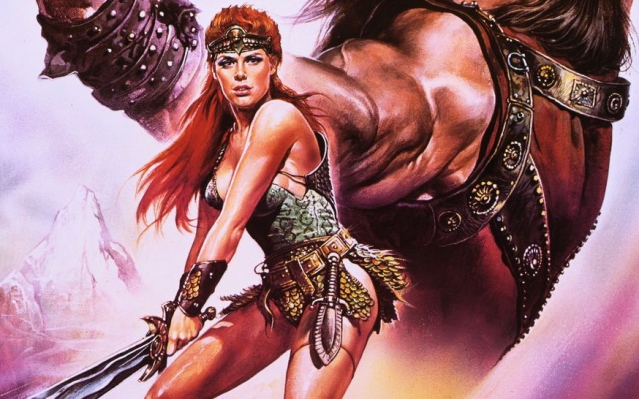 The 6’1″ Danish platinum princess made her on screen debut in 1985 with the fantasy juggernaut Red Sonja, playing the title character in this now-forgotten sword and sorcery action film. Not a very good movie by any means, but still better than 4,000 other far more terrible barbarian movies. Arnold Schwarzenegger co-stars, following the blockbuster success of Conan the Barbarian and Conan the Destroyer. To be honest. the movie has its flaws but is worthy of a revisit even just for the tantalizing visuals of busty nomads and loin cloths galore.

1985 continued to be a strong year for Brigitte as she landed the role of Drago’s wife in Rocky IV and then went on to marry Sylvester Stallone! (More on that later). ‘Gitte and Sly made Cobra the following year where she played the damsel in distress being night-stalked around the city and dimly lit parking garages. To me, it’s her strongest cinematic performance to date. In 1987 she landed her last major motion picture role in Beverly Hills Cop II, followed by a string of bombs including Bye Bye Baby, Domino, 976-Evil II and oodles of straight-to-video disasters over the next decade.

Her run may have been limited — but who cares? Examine that power pack of films…Red Sonja, Rocky IV, Cobra and Beverly Hills Cop II! Oh and you can add this to the mix: rumor has it that Brigitte was a big contributor to the casting of Stallone’s arm-wrestling/truck driving extravaganza OVER THE TOP. We owe her a debt of gratitude if that’s true.

If there’s one thing Brigitte has done right in her life, it’s her plethora of great men! Married 5 times with 5 kids (the latest she recently gave birth to at 55 years old!), her lengthy list of male talent includes Sylvester Stallone, Mark Gastinau (NY Jets) and Flavor Flav…just to name a few. While the marriage to Stallone only lasted 19 months, one can only imagine the wild adventures a power couple of that caliber experienced. Sexual exploits, action movie role-playing, exotic encounters, the finest cuisine, nights in Milan…just the works.

In her autobiography, she revealed details about an affair with Schwarzenegger during the filming of Red Sonja, a promiscuous one night stand with Sean Penn and a bubble bath with that homely redheaded singer from Simply Red. 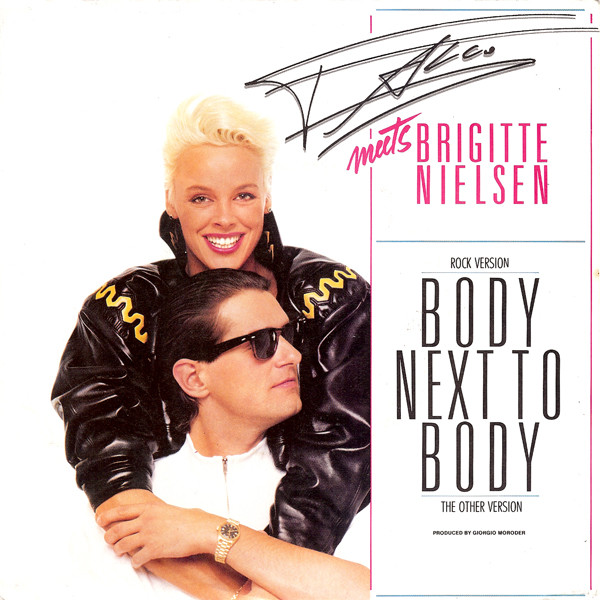 Not many people know about Brigitte’s attempt at a music career. The model-turned-actress-turned-singer released two albums, the first effort Every Body Tells a Story in 1987. The single was a duet with pop star Falco of “rock me Amadeus” fame. It became a top 30 hit in Italy but even with the help of Giorgio Moroder, the track failed to capture the hearts of most and win the world over. Check it out:

Not the worst. Certainly not the best. Let’s cleanse our pallets by blasting the fuck out of ‘Angel of the City’ from the Cobra soundtrack featuring our blonde powerhouse and a sexy robot shoot. Stallone really had a thing for robots.

I hope you enjoyed digging into the career of Brigitte Nielsen. For the reasons explained, I’ve always found her to be a little bit fascinating. Now go watch Rocky IV and Creed II!