In this edition of TNUC’s Unsolved Mysteries, we’re sinking to the bottom of the WWF barrel to hopefully piece together what little historical information we have about a professional wrestler named L.A. GORE to try and make sense of this forgotten jobber’s legacy. 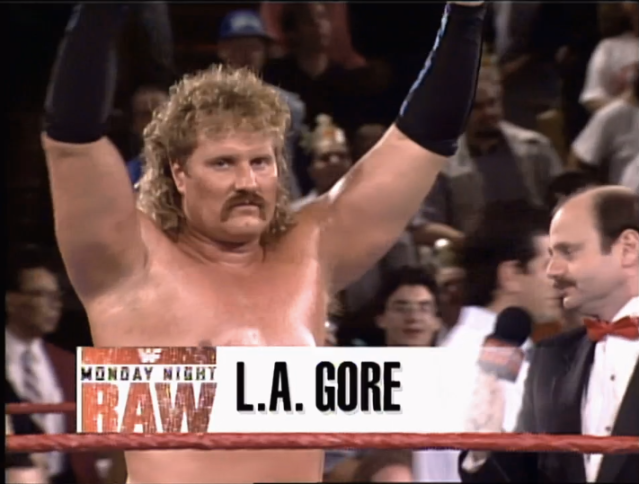 L.A. Gore was one of the best “wrestling jobbers” to ever cross the ropes. For those of you too cool for wrestling, “jobber” is the disrespectful term in the wrestling business for a wrestler who routinely loses matches. It comes from the slang word “job” which means purposely losing a performance in the ring to assist with a story line. An essential component of the wrestling entertainment world.

There are literally hundreds of jobbers in professional wrestling, so why focus on this meaty neanderbeast? #1. The name. If the title L.A. Gore popped up during the previews of my Michael Dudikoff Cannon Films VHS box set, I wouldn’t blink an eye. The name screams early ’90s dull action movie or low budget horror flick. Many people believe his name is a play on Al Gore (reversing the two first letters), hinting at WWF mastermind Vince McMahon’s “political edge” during those years. However after a bit internet lurking, I discovered that L.A. Gore competed under this name as far back as 1991, and for a completely different company (WCW). This would have been five whole years before he joined the WWF. Furthermore, Al Gore wasn’t nominated as the democratic nominee for Vice President until July of ’92. Al was merely a senator at the time this sweaty buff pumper entered the professional wrestling business and I have a hard time believing that he adopted the L.A. Gore character after some lousy politician. I mean…look at this guy. Doesn’t add up.

#2. The look. I’m a huge fan of the beer-guzzler, cheeseburger-destroyer body types of yesteryear’s wrestlers. Guys with Dad-bods like Jake the Snake, Hacksaw Jim Duggan, Mick Foley, Dusty Rhodes and The Godfather possessed superior strength without giving a damn about looking good. Absolutely NOT working out everyday to strive for that chiseled, Michelangelo appearance. Just strong, able to beat people up, execute the moves and leave the ring hightailing for a beer and sausage & peppers sandwich.

L.A. Gore certainly fits in this category, although he probably took it too far with that bloated beer gut and the fact that he lost every match he ever had in the WWF. Still though, it’s fun seeing a guy enter the ring who looks like he just polished off 17 Budweisers and had to be dragged from the bar to the arena. He even had that “WHY AM I HERE?” look on his face during matches. 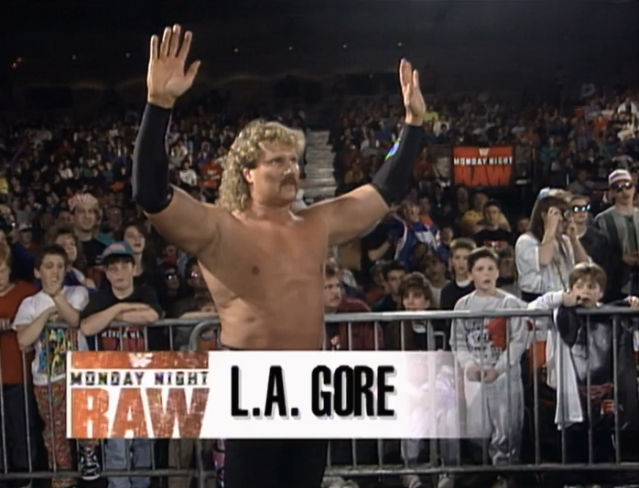 #3. The mystique. It’s all speculation as to what happened to L.A. Gore. What he’d be doing in 2016 is even more of a brain-melter. Driving a school bus? Dealing bottom rate cocaine at the VFW? Working security at Filene’s Basement? Sharing a studio apartment with Malibu from American Gladiators? Taking long rides up the coast in his ’88 Monte Carlo SS, smoking endless cigarettes, windows down, heat on full blast, with Dokken’s ‘Alone Again’ on repeat? Just WHO are you L.A. Gore and more importantly WHERE are you???

This is 1,000% his unregistered vehicle:

Below, watch Mr. Perfect deliver brutal chops to our friend in their match on the June 4th, 1993 episode of WWF’s Monday Night Raw.

::Robert Stack voice:: IF YOU, have any information about this case, please leave a comment in the comment section. You need not give your name, but remember, for every mystery, there is someone, somewhere, who knows the truth. Perhaps that someone is watching. Perhaps that someone…is YOU.

← TOO YOUNG TO DIE.
JOBBER TAKEOVER. →