DECEMBER’S DEADBEAT OF THE MONTH: PAULIE. 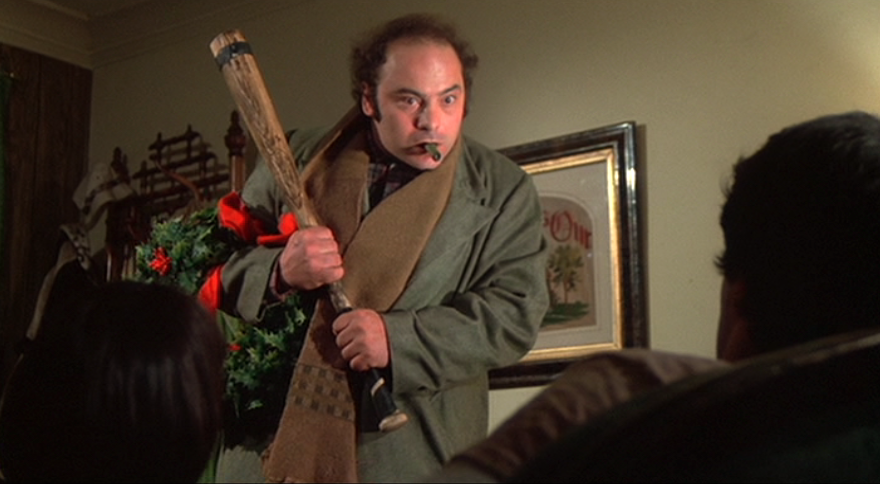 It’s with great honor and privilege that we declare Paulie of the Rocky movies to be TNUC’s FINAL Deadbeat-of-the-Month. 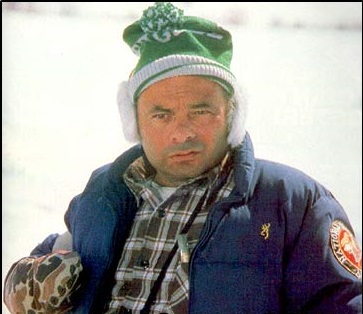 Since we started this monthly journey into the deep abyss of depravity a year ago, Paulie was always on my mind. He’s the ideal candidate for Deadbeat-of-the-Month because he’s TNUC’s favorite type of deadbeat – guys that are basically good people deep down but the quest to locate that “good-ness” requires you to sift through a number of sleazy, insulting, drunken-slob qualities.

With that out of the way, we can now focus on the top (3) features that allow Paulie to be such a wonderful deadbeat. 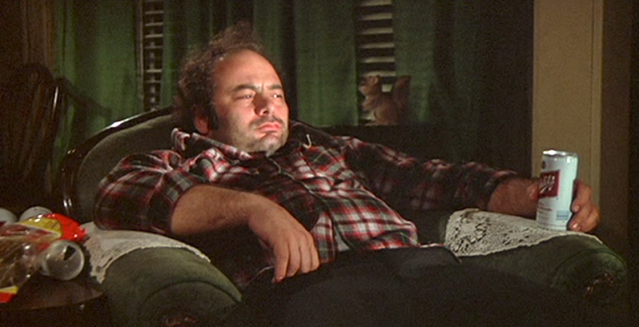 Paulie is a raging alcoholic which is blatantly displayed throughout the entire film franchise with countless scenes of him pounding cheap, bottom of the barrel beer and liquor. Consuming all this alcohol makes Paulie a bitter bastard, taking out his anger and frustration out on his sister Adrian and soon to be brother-in-law Rocky Balboa. In the photo above he’s drinking Schlitz, one of America’s oldest beers. It’s definitely cheap beer but still probably the classiest beverage we see Paulie drinking during all six movies. It’s all downhill from here.. 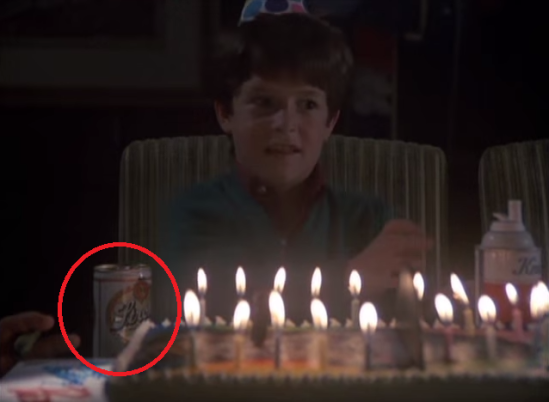 If your definition of bad, cheap beer is Keystone Light you simply aren’t operating on Paulie’s level. His beer choices come from the family of “deadbeat beers” – stuff that tastes like it was brewed in a prison sweat-sock and is normally only sold in 30-packs (alcoholics/power-drinkers only). They don’t sell it in 6-packs because their customer demographic requires a lot more that six beers to get them into blackout, banshee, piss-your-pants glory.

In the above shot at Paulie’s birthday party in Rocky IV, next to his nephew we see a can of Stroh’s, notorious kingpin of the deadbeat beer universe. Before Stroh’s was bought out by Pabst Brewing Company in the early 2000’s, the Detroit-based company also produced Schaefer, Old Milwaukee, Lone Star and many other degenerate brews. If you haven’t seen your family in a while and for some reason plan on really freaking them out this holiday season, show up to their house with a case of Stroh’s and watch their faces drop. Or if you’re dead broke and worried about making rent this month, but know you won’t be able to shake that craving for 17 beers tonight, take Paulie’s advice and pick up the always-affordable Stroh’s. 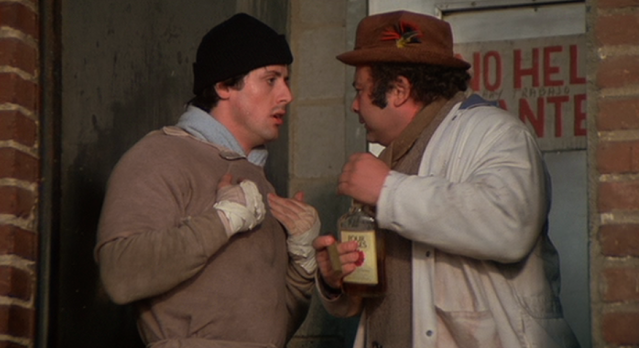 Chugging beers everyday is one thing, hell, we fully support this sort of activity in the Land of TNUC. But drinking second rate, snake-piss whiskey all day/everyday is an act made only for guys like Paulie. In just about every scene in the original Rocky, he’s seen taking pulls of his bottle of Four Roses (see above). These days Four Roses is a fairly respected, “straight” bourbon…but there was a time when it was basically known as homeless booze. Before 2002 the brand name was used on a blended whiskey, so it was seen as sub-par to other bourbons. This of course happened to be during Paulie’s love affair with the drink as he’s seen taking swigs of his bottle at the meat-packing facility, on the street and just about anywhere he pleases.

One can sympathize with Paulie on the basis that the guy works in a freezer surrounded by raw cattle carcasses all day in dreary Philadelphia. If that alone isn’t a reason to drive him to drink, he also hates his job and wants to work for local mafioso Tony Gazzo. With every attempt Paulie tries to make with Rocky to put in a good word for him with Gazzo, he fails miserably and falls deeper into his bottle of bottom shelf whiskey. 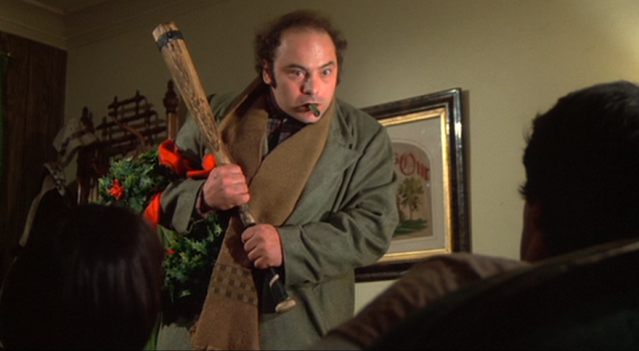 Paulie is without a doubt an angry and negative bastard. His jealous rages toward Rocky and drunken outbursts on Adrian turn violent at times, resulting in him making an ass out of himself and even getting arrested as seen in Rocky III. See below for a refresher.

This is one of my favorite scenes in the entire series because it feels like for a second you’re watching a gritty, NYC grindhouse-horror flick…STARRING PAULIE. The mood and atmosphere as he stumbles through the arcade is downright chilling. If this taste of “Paulie-terror” is something that gets you excited, go watch 1982’s Amityville 2: The Possession starring Burt Young to help suppress your appetite.

This scene in the movie is the arch for our #1 deadbeat. In the first film he’s at an ultimate low – smashing shit with baseball bats, throwing turkey dinners into alleys and screaming at Adrian that she’s a loser. As Rocky gains momentum and starts making a name for himself, Paulie’s life gets better and we see him become relatively tame in the sequel, Rocky II. By the third film Rocky is making all kinds of money and Paulie reaches his breaking point with jealousy, as seen in the clip. This drunken explosion ends up getting him arrested, then Rocky bails him out of jail and they almost get into a fistfight in the parking lot. Rocky eventually sees what’s going on and gives him a job as ringside assistance.

In Rocky IV, Paulie elevates his inner-deadbeat by turning a once-harmless robotic into an alleged electronic sex slave.

I bet Rocky and Adrian never dreamed when they surprised Paulie with a robot for his birthday that within a few days he’d have the talking machine saying things like “you’re the greatest” and “see ya, sport” in such a seductive voice. You can tell by the nervous look on Adrian’s face that she knows something else is up, but can’t bare to know the details. Watch the clip and wait for 1:19 to witness the robot’s transformation.

As the robot feeds him Stroh’s beer all day, he lounges around in his wifebeater and God-only-knows what down below (if anything). These scenes are meant to be lighthearted and comical, but i’m pretty sure there’s a lot more going on here. Just look at the expression on Apollo Creed’s face after the robot exits the room. 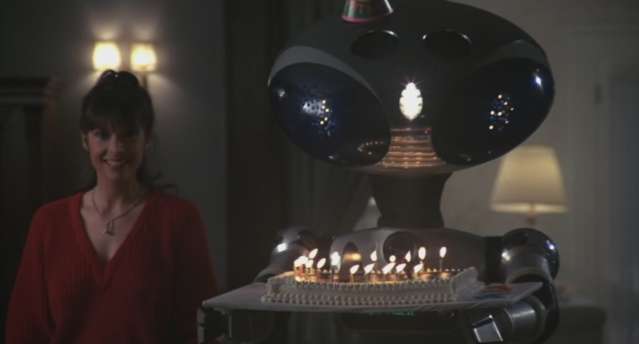 **FUN FACT** – What if I told you that our favorite robot of the 1980’s was actually designed to treat autism in children? It’s true. The “happy birthday Paulie” robot’s name was Sico and it was designed by a company called International Robotics in the mid-eighties to communicate with autistic kids. Back then autism was very under researched and Sylvester Stallone’s son Seargeoh was autistic, which is what eventually brought Sico to the set of Rocky IV. Stallone loved the robot so much that he wrote it some scenes for the movie. There is said to be a few hilarious scenes that were cut featuring Paulie and the robot in some sort of “Odd Couple” style relationship!

[I hope you disciples enjoyed TNUC’s DEADBEAT-OF-THE-MONTH retrospectives this year. We’re calling it quits after thirteen months of writing about these delinquents (December 2013 – December 2014) in hopes of starting a new monthly feature for 2015. Uncle T truly appreciates you sticking around to read or just quickly scan the posts each month! As always, you can revisit the saga of Deadbeats here.]

← THE DUET.
A TNUC CHRISTMAS MIRACLE. →

1 Comments on “DECEMBER’S DEADBEAT OF THE MONTH: PAULIE.”