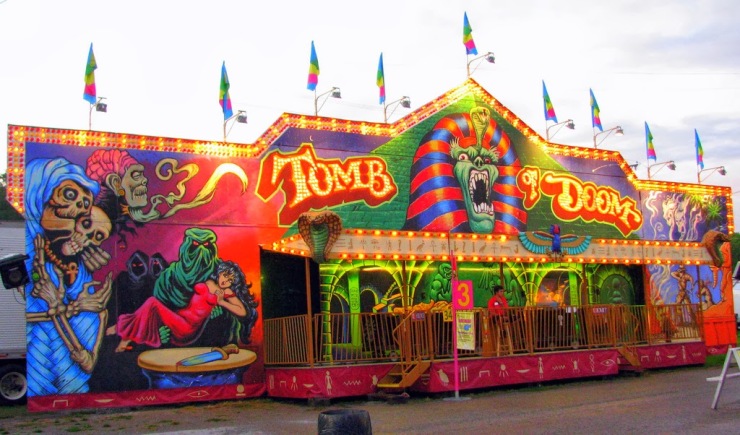 If you ventured into “funhouses” during the 1980’s and are living to tell about it, consider yourself lucky. Lucky that you aren’t DEAD + BURIED. Grandfather TNUC told tales of how kids were being swallowed up inside these things, and if Grandfather TNUC said it, consider it true. To this day, the entire concept of the carnival, fair or traveling amusement park is pretty terrifying to begin with. The typical deal is that a bunch of strangers roll into your city or town who have been tearing it up on the road for God knows how long, some of them possibly even born on the road, facing a lifelong sentence of being a carny. Rides are set up with just enough nuts + bolts installed the equipment to not kill anyone…but even if that happens, they’ll be packed up and off to the next town before a lawsuit or investigation can even begin. Normally trailer-semis unfold to what becomes the full-blown funhouse. Space is limited inside, which allows for elaborate wackiness and in-your-face hijinks. Curious ones like TNUC like to creep around to the backside of the funhouse to see how this magical transformation takes place, but quickly turn back and walk away after getting some rapey glares from the bearded lady and lobster boy who are on break, sharing a carton of cigarettes. 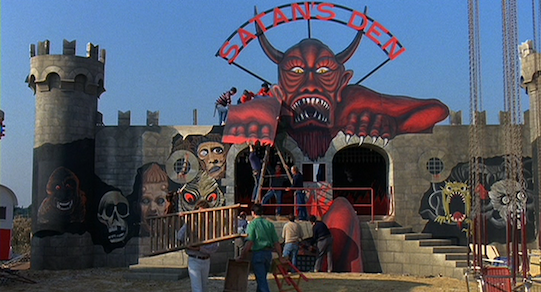 Presented so far is a pretty grim look at the funhouse, but I assure you TNUC is a longtime supporter of these places. The funhouse is a staple at the typical carnival, but probably remains the most unpopular attraction of the bunch. It’s an easy attraction to skip if you’re a thrill-seeker who paid to go on a ride that will have you hurling up that combination fried-dough-corn-dog you insisted on having. The next time you frequent the fair or carnival, take a stroll through the funhouse. The comic book-style artwork and design alone should lure you inside – it’s usually pretty impressive, many times with horror as a main focal point, which is a great feature if your fair comes around during the summer months (it’s like having an off-season haunted house). Blinking and fluorescent lights are peppered throughout the exterior and usually the carnies, being big heavy metal fans, blast this type of heavy metal to allure crowds over:

The inner-features of the funhouse vary from one carnival production to the next. If lucky you’ll get a walkthrough and you won’t be forced to ride in a foolish cart. Walkthroughs are appealing because it allows you and your group to roam free. If you happen to be on a hot carnival date, this might be your chance to seduce your partner behind a dark corner…just try to avoid being eaten by a ghoulie, clown or inbred carny-worker. Most commonly the entire walkthrough will be a maze consisting of such features as tipping/moving floors, strobe lights, distorting mirrors, dark corridors, loud noises, fog and strange smells……with a slam-damn guarantee on the bad smells.

My recommendation to people who have the unfortunate disadvantage of not being able to visit a nearby funhouse, your best bet is renting Ghoulies 2 or The Funhouse for the most accurate depiction of what generally happens inside. Take it as a warning!

Below, an abandoned funhouse.