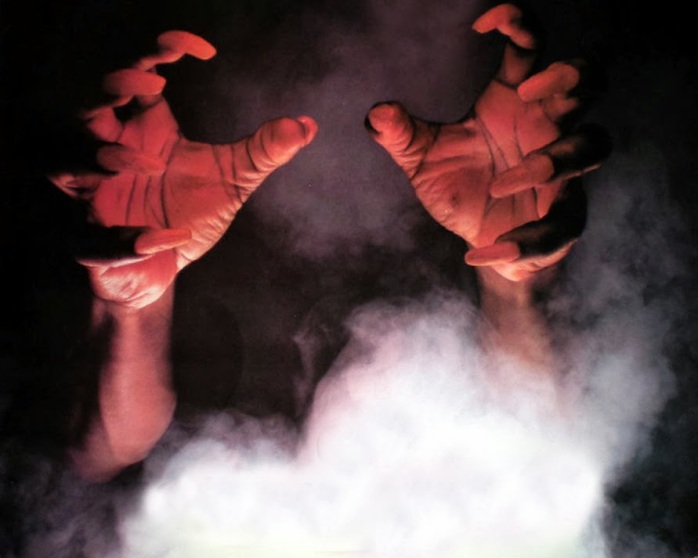 As much as TNUC looks forward to a good ol’ homicidal, disfigured maniac stalking the streets after a pack of promiscuous teens, it’s nice to see the tables turn once in a while. In 1988’s Fright Night Part 2,  babe-vamp Regine Dandrige has big plans of avenging her brothers death (Jerry “Trench-coat” Dandrige) by turning young Charley Brewster into a bloodsucking creature of the night so that he can face the ultimate punishment that he deserves – immortality. Regine is quite the alluring hellcat who mesmerizes Charley with her sultry moves and tender touch.

TNUC likes to think of himself as someone who could easily turn away from Regine’s hypnotic eyes and find the strength to slay this nighttime biter…but if I ran into this sort of situation while Deborah Holland’s ‘Come to Me’ was playing in the background, forget it. I’d be neck-to-fangs with the she-bat and soon be living in eternal hell! But at least I’d be going out with a wonderful roll-in-the-hay with Regine Dandrige. It could be worse.

This song comes from the still-unreleased soundtrack to the film and capitalizes on one of the pivotal themes from the first Fright Night movie, Brad Fiedel’s ‘Come to Me’. The vocals on the original song were weak and didn’t produce the boner-chiling vibes that you’re hearing now. I always preferred the moodier instrumental, which we featured here on a post for CAMP TNUC back in 2009. Watching the sequel led me to realize that the song needed a woman’s touch, which happened when Deborah Holland was asked to cover the track. The music is taken to it’s sexual peak and I could not be happier with having this bootleg version from our bud Phaota which upon first listen made me feel like I was living in some VHS-sexual-dream-fantasy. Hopefully you experience similar symptoms. Enjoy.