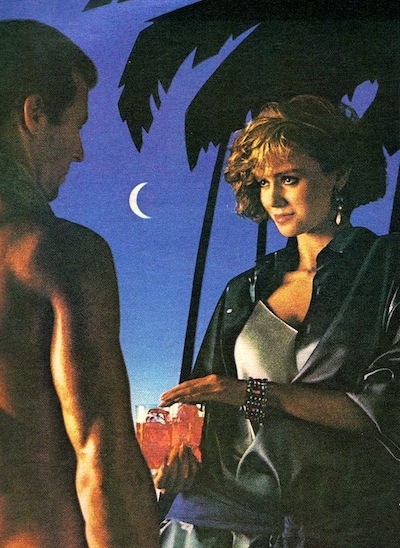 LOVELOCK is one of those projects that instantly upon hearing the demos/edits/remixes way back when, I was removed from a world of ipods and digital music and sunk into an underwater galaxy of adult disco, stainless-steel luxury sport vehicles and Banana Boat Tanning Oil commercials. Roughly six years later the debut album, Burning Feeling now surfaces with a release date this week, proving that the wait was well worth it. The songs on Burning Feeling take you on voyages to destinations unknown, whether you want to go or not. I could be fresh off listening to a Slayer record but if ‘Deco District’ or ‘Maybe Tonight’ is up next on my receiver, it’s like nothing existed before these songs. TNUC is in no place to review an album as “real disco”, I don’t have enough of a disco/dance historical background to do so. But if I were to take a stab at what sounds like authentic disco, I can’t imagine a stronger sound. This is adult disco for real men and real women.
TNUC had the recent pleasure of interviewing Lovelock a.k.a. Steve Moore. Here’s how it turned out…

T: How did the Lovelock project start and what sparked it?

SM: It was 2006 – I was deeply in debt and suffering from some kind of tour-related PTSD.  Zombi was just coming off an epic 3-year tour of the American Midwest.  Writing disco/dance/pop music just seemed like the next logical step.  It was sort of like a retirement project, like some guys move to Florida and build ships in a bottle.  In hindsight that probably would have been a much better idea.  My buddy Doug Mosurock came up with the name.  Of course Ray Lovelock (Let Sleeping Corpses Lie, Autopsy, etc) was the inspiration.

T: Why now? What made you decide “ok this is being released finally”
SM: It wasn’t by choice. This album was finished in 2007, and I spent a ridiculous amount of time and energy trying to find someone to release it in 2007. I was way out of my element though. I had no idea what I was doing. I had a few labels I was talking to but nothing panned out. In late 2009 I hooked up with Prins Thomas, who said he’d put the album out on his label. I was a fan so it was an honor, and it seemed like a good fit. Two and a half years later and here we are.
T: Rumor has it that Bertie Higgins dropped out last minute on a collaboration with you on this album because he saw your recent photos in your RA interview and said that not only was your hair not feathered, but your beard and stache were not up to par. Did anyone else guest on the album?
SM: I blew my entire budget on the two Barbara Beaches cameos.
T: What synths are you crushing on this album?

T: I believe I recall reading an interview you did that said the songs on this album are most likely the last you’ll do. Why is that? Nothing gold can stay?

SM: Lovelock has become a remix-only project.  I can’t picture myself doing another album like this.  Must have been the Post-Tour Stress Dissorder – for some reason I got it in my head that I wanted to be the center of attention, you know?  I think I may have even wanted to become “famous.”  It’s all a blur now – I’m in a different place.  Now this stuff seems like ancient history – the “newest” song on this album (“New Age of Christ”) has been finished for over four years.

T: To me, the perfect Lovelock live show would need to take place either at Red Rocks Amphitheater at dusk or on a private yacht with its anchor dropped in the middle of the Caribbean. In your mind, what would be the ideal venue for the ultimate and mega-exclusive Lovelock live event?

SM: The lounge at Al Monzo’s Palace Inn, Monroeville PA.  Sadly, the place no longer exists.  It was a warp zone straight to the 70s.  White stucco walls, dark wood beam ceiling, leather lounge chairs with brass studs around a long, table-height bar.  Low lighting, always smokey.  Stained glass.  Filled with senior citizens.  Tabletop Pac-Man machine.  The obligatory televisions for watching sports but only like golf, or boxing or horse racing.
T: One of my serious dreams for TNUC is to have a massive and absurd collection of merchandise, like stuff that you really don’t even need or use. Similar to that scene in Wayne’s World where Garth is lounging back in his chair decked out in full Reebok merch. If some lucrative, corporate-pig record company handed you a check for $50,000 strictly for designing Lovelock merch items, what sort of obscure items would adorn the Lovelock gift shop?

T: Can a Billy Ocean “Lovelock remix” happen? Or even a cover? My friends/colleagues and I can pool some cash to fund it. I know you love some Bill.

SM: Big fan, definitely.  The problem there is that his songs are too perfect.  I’d rather remix someone like Usher.  Take a really strong singer and put his vocals in a sort of Billy Ocean setting.  Like that “DJ’s Got Us Falling in Love” song.  I could make that work.

T: Did you ever have any Lovelock-ish ideas for songs, artwork, videos, etc. that just didn’t work out for whatever reason? And if so, would you care to share any?

SM: Oh man I have tons of abandoned song ideas on an external hard drive.  At least another album’s worth.  If all goes according to plan nobody will ever hear any of it.
T: A beautiful, exotic Cabana girl is swaying effortlessly in a hammock on a remote island with “South Beach Sunrise” playing over and over again. What native fruit is she seductively snacking on as she sways in the wind?

SM: The Fruit of Despair, borne of the Tree of Longing.

T: Any last words for the Lovelock legions?

SM: Keep one foot in the gutter and one fist in the gold.
Purchase Burning Feeling @ Amazon
Purchase the Maybe Tonight 12″ @ Amazon
Steve Moore via Soundcloud