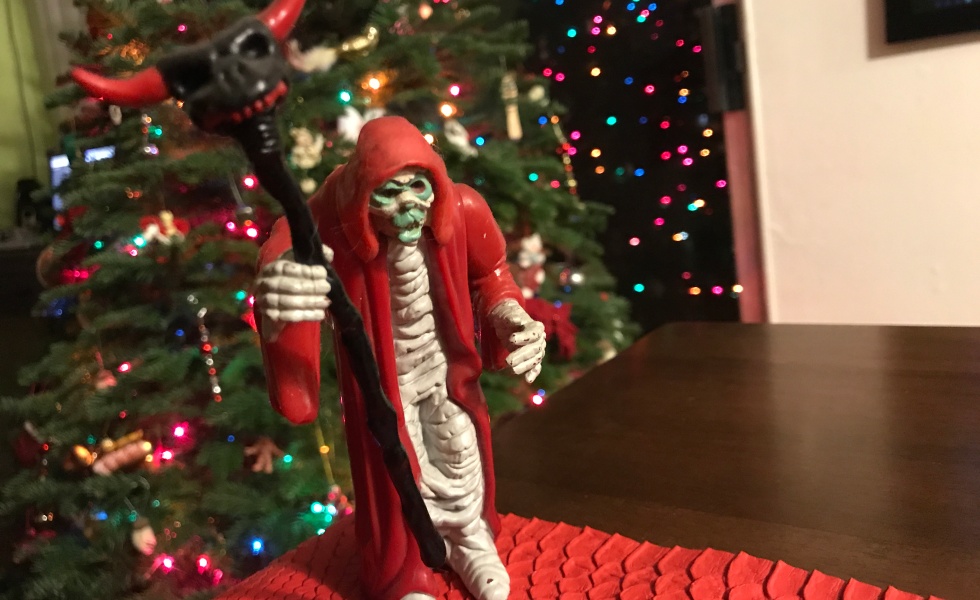 Here comes an article that we planned on writing around Halloween time, but sort of works with Christmas because it revolves around toys. Well, toys that represent death.

Before Uncle T is scrutinized for pairing Christmas with an ancient figure of death, hear me out. I realize this isn’t the cheeriest choice of subject matter but you’re just going to need to trust Uncle T. After all, this feature is about toys.

I’ve always had a fascination with Grim Reapers. That ominous cloaked figure floating around the countryside, carrying a big scythe and collecting victims is just pure radness. For me it probably started with Monty Python’s The Meaning of Life. The British comedy group’s knack for dark humored sketches was the perfect way to deliver such a memorable performance as seen from Mr. Death in the 1983 film. From there, these cloaked skeletons would surface in everything from heavy metal album covers, to Bill and Ted’s Bogus Journey, to characters developed into toys…lots of toys!

In celebration of Christmas week, we’re highlighting the best Grim Reaper-y looking toys that Jolly Old Saint Nick has ever nestled safely under our tree in a feature we’re calling DON’T FEAR THE REAPER TOYS!

Before turning into the blue-skinned beefcake that walked around intimidating people, Mumm-Ra was a decrepit old geezer who had an air of mystique about him. While the muscled Mumm-Ra was sold in stores like all the other figures, this old man mummy version was unique in that if you wanted it, kids had to save up 6 proof-of-purchase seals and send them in to receive him in the mail!

The good news is that this 3-decade-old action figure is still fairly easy to find and won’t cost you much. The next time you’re about to whine about how you can’t find a decently priced Skeletor to replace the one your big brother fed to his tarantula, consider picking up this red cloaked reaper instead!

“Life is great for Bill and Ted… until they’re killed by evil robots from the future! To cheat death, save the world from evil, rescue the princess babes, and be back in time to win the Battle of the Bands, they’ll need a little help from the Grim Reaper himself.”

“Death” from the sequel, Bill and Ted’s Bogus Journey, got his very own action figure in 1991 when Kenner released the Bill & Ted’s action figure toy line. This ghoulish reaper could easily transform into a guitar-wielding Wyld Stallyns band member simply by removing his cloak to expose his blue mohawk. Neon scythe and neon guitar included. Speaker and tape set sold separately.

CHARON aka Devil’s Boatman!
Clash of the Titans, 1981

Not only am I a sucker for Grim Reaper-y looking dudes, but I love it when toy companies like Mattel release action figures for every single obscure character who shows up on screen, as brief as that appearance might be. Charon appears in 1981’s Clash of the Titans movie when he takes Perseus and his gang across the River Styx. Whether or not you’re a sci-fi or Greek Mythology fan, the brief appearance of this cloaked creeper is a must-see. If I were Perseus I would’ve taken a couple laps around the river with this fine ghoul.

One of TNUC’s most sought after holy grails, the Matchbox ‘Monster Wars’ collection was released in the early ’90s and paired the most popular monster trucks with frightening little figures carrying deadly neon trinkets. There isn’t much documented historical information on these guys, which adds to the allure. I love Monster Trucks (especially Grave Digger), but I think the monster truck “world” missed out capturing a large demographic by not making them more cartoonish and fictional, like Matchbox attempted with these toys. If monster truck “culture” had gone a more over the top route, like WWE and their wrestlers, the mainstream audience would’ve really been more into monster trucks. Imagine Grave Digger, Prowler and Bigfoot being driven by devilish monsters in makeup and rubber masks. Instead the drivers are usually just hillbilly dudes with handlebar mustaches.

Who doesn’t love an obscure collection of tiny monstrosities? Thanks to Dinosaur Dracula who put these on our radar, the Super Monstrous Special Series hailing from Spain were a set of 24 different horror-themed ghouls and ghoulettes including a devil, yeti, executioner, bootleg “Freddy”, vampiress, pirate and La Muerte aka “The Death”. Is Uncle T planning on completing the entire collection and bringing them to a local cemetery for a candid photo session? You better believe it.

The original Mad Monsters were released in 1973 by Mego, the company behind legendary figures from DC, Marvel and KISS. A few years ago Mego experienced a resurgence and brought back the Mad Monsters which included our deadly friend The Grim Reaper. At 8 inches tall this reaper is the biggest of the bunch. If you prefer a classic, no frills, balls-to-the-wall figure of death, this is your guy.

CRYPTKEEPER!
Tales from the Cryptkeeper, 1994

Cryptkeeper in a brown cloak and Jesus sandals is the best Cryptkeeper figure of them all. Laugh at his overall appearance but the sculpture and detail of his face is ripped so accurately from Tales from the Crypt, it’s scary good. This version of the Cryptkeeper comes from the kid-friendly, Saturday morning cartoon, Tales from the Cryptkeeper. Is it completely bizarre that his legs and feet are a completely different color than his head and hands? Yes, but he works GREAT in Christmas nativity scenes if your cat stole one of the Three Wise Men and you need a replacement.

Thanks for reading about TNUC’s fascination with Grim Reapers. Now go listen to some Grim Reaper!

Ian the Shark: You know, l can understand ”Mom” or ”l Heart Wanda”, but why the Reaper?
Chazz: Well, it’s like death is stalking me and it’s telling me I better get off my ass and get this band rolling. This is for real. I gotta cut a record. I figure l’m screwed up enough that l could write a song that’ll live on for ever and then after that it don’t matter. You know?
(Airheads, 1994)

← SAX BY THE FIRE.
JANUARY’S SLOB OF THE MONTH: LARDASS HOGAN. →