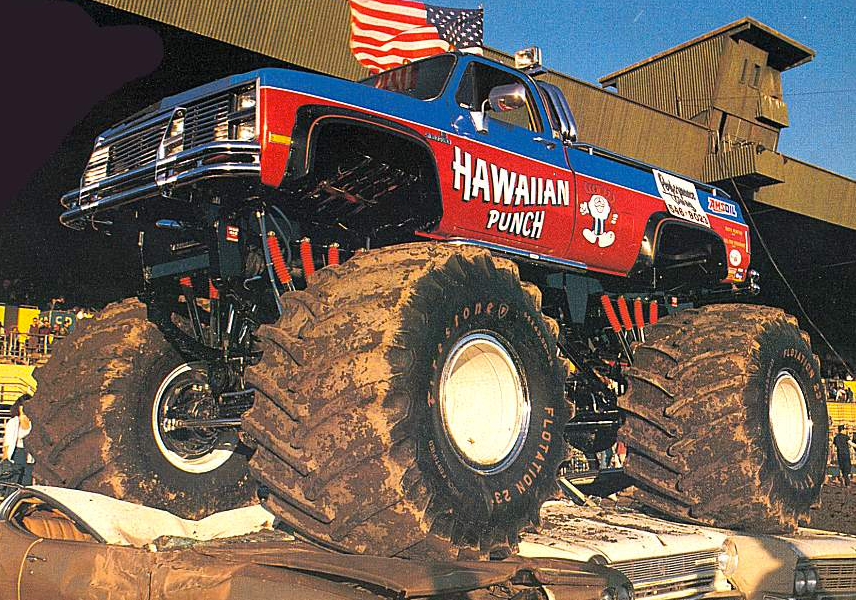 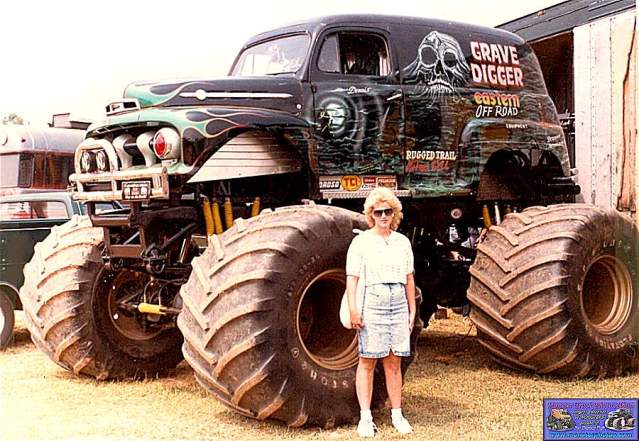 Face the facts, we’re long overdue for a discussion about MONSTER TRUCKS. It all started the other day as I was reclining on my alligator floatie in our tv/pool area watching Road House for the 700th time. The scene came up when Brad Wesley gives the “ok” look to one of his goons to proceed with driving a Monster Truck through Strodenmire’s car dealership, demolishing every perfectly good car in sight. It donned on me that we haven’t covered all-things MONSTER TRUCKS even at least once on TNUC. The sudden shock and confusion made my box of Keebler Magic Middles launching into the pool. If a small town-conquering, evil-doer like Brad Wesley understands the raw power of a pickup truck set on 66-inch wheels, so does Uncle T.

Call me trashy or a deadbeat, but I think classic-era Monster Trucks hold a special charm in the same category as say, American Gladiators and female mud wrestling. (Two subjects we’ve already covered here). Big, dumb and tons of fun.

This scene cost $500,000 to stage and was shot in a single take. They used a “Bigfoot 7” which was specially built for the movie. The guy operating the truck was Jim Kramer, the president of Bigfoot.

Did you know that the first “Bigfoot” was built in 1979 by an ex-construction worker from St. Louis? Bob Chandler turned his Ford F-250 pickup into something he could go off-roading with and promote his family’s 4×4 shop. He ended up making appearances with the truck at car shows and one day asked a local farmer if he could place two dilapidated cars in a field so that he could videotape himself crushing the cars with his “Bigfoot” as a joke. Shortly after the stunt, a motorsports promoter stepped into Chandler’s shop and caught the footage on the TV. He asked Chandler if he’d repeat the stunt in front of a crowd. Chandler agreed and in the following years cars were being demolished inside arenas across America, with imitators, sponsorships and thousands of screaming children and beer-annihilating adults. The behemoth on wheels gained so much popularity that it spawned toys, merchandise, appearances in movies and even an animated series in 85′ called Bigfoot and the Muscle Machines.

See, there are actually interesting things to learn about Monster Trucks. Beyond the brute strength of these vehicles and how they ranked during competitions, some of the names and artwork are just downright inspiring. Sometimes all you needed was a glance at the name or artwork painted down the side of a Monster Truck to feel its wrath. Some of these trucks may be long and gone but the crude tude’ and sheer nastiness remain in photographs.

Now it’s time for TNUC to countdown OUR top 10 MONSTER TRUCK MANIACS (With little information about these trucks, we’re purely basing this on “looks”!) 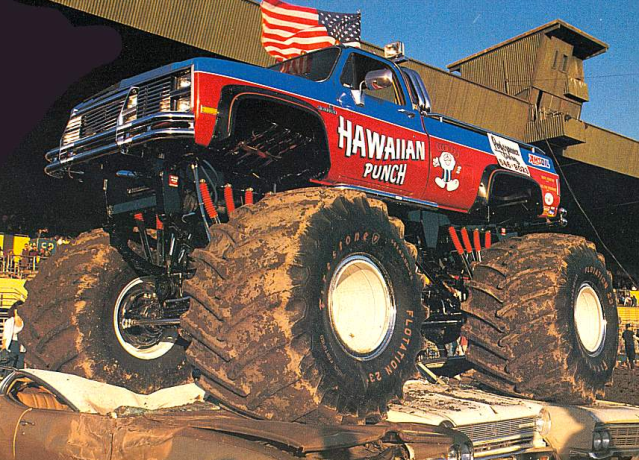 Idea for parents trying to impress their kid with the ultimate birthday surprise…hire the “Hawaiian Punch” Monster Truck to crash the backyard birthday-pizza-party. Make sure he follows strict orders to 1) plow directly through your snobby neighbor’s hydrangea garden, 2) crush the inflatable rental jump-a-roo and 3) completely demolish the above-ground pool. PARTYTIME. 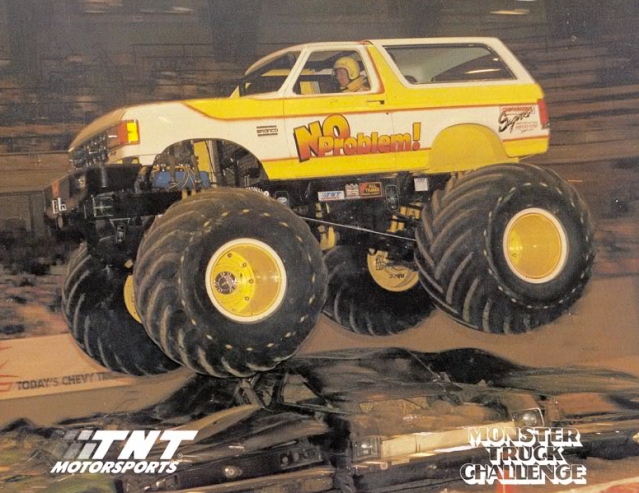 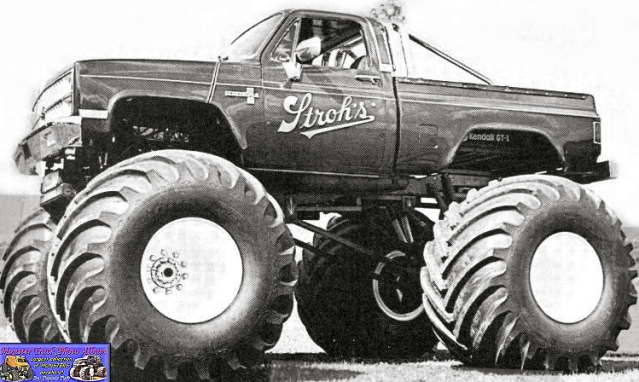 Leave it to one of the premiere kings of ‘deadbeat beers’ to create their own Monster Truck. OF COURSE Stroh’s needed to be involved. It really is such a perfect marriage. Paulie from the Rocky movies should be driving this thing around Philadelphia screaming at people in his signature deadbeat language. 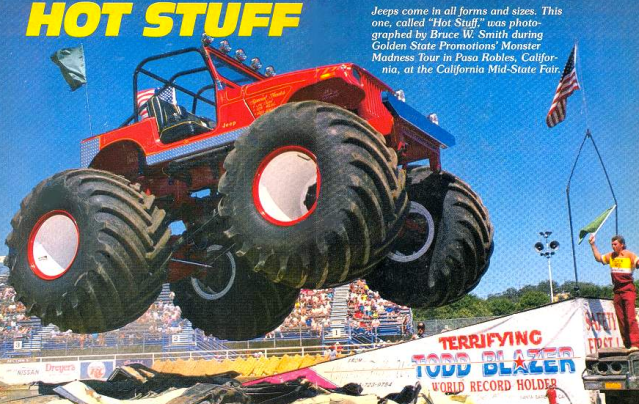 Rumor has it that Kip Winger from the band Winger is now the proud owner of this rompin’ and stompin’ Jeep CJ-7. Every day he drives “HOT STUFF” up and down Daytona Beach with his sunglasses on, chewing gum ecstatically with his oily bicep extended out the side door, giving a thumbs up to every buxom babe in sight. Nah, just kidding. Would be the ideal situation, though. 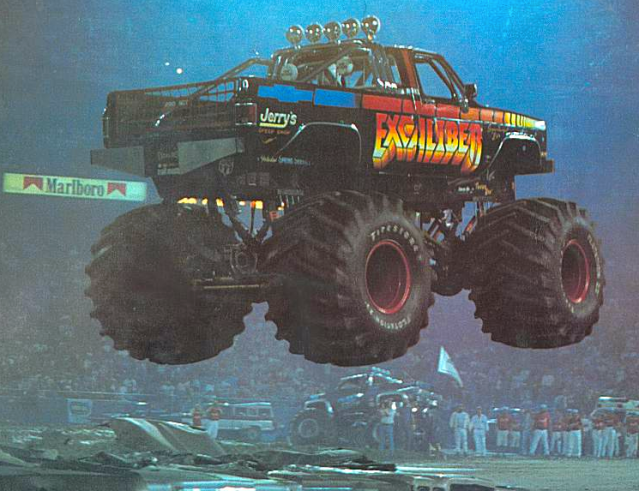 “Excaliber” was one of the more popular monsters throughout monster truck history who lasted a lifespan from 1985 to 2013. I definitely lean towards the simpler “old pickup on cocaine” style of Monster Trucks, rather than some of the more intricate and crazy body work styles of today. Plus, how can you not fall in love with that photo? A 13,000 lbs Chevy soaring through a cigarette-hazed filled arena. It’s magic. 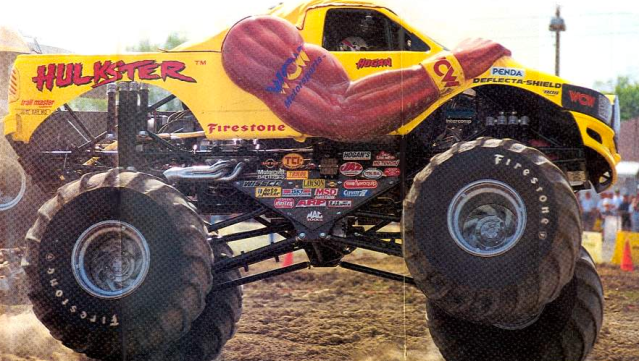 At the Halloween Havoc pay per view in 1995, Hulk Hogan’s “Hulkster” truck pushed Giant’s “Dungeon of Doom” truck out of the circle for the win in what WCW had named a “Sumo Monster Truck” match. The rules were that you had to get both sets of axels out of the ring, which was 100 ft. in diameter. Pretty dumb, yes, but still riveting entertainment. (WATCH HERE). Hulk’s truck was a “Bigfoot” model and featured his bulging, hot dog colored arms on each side of the vehicle. Besides Hogan, WCW also built custom trucks for Sting, Medusa, Goldberg, NWO and Macho Man! 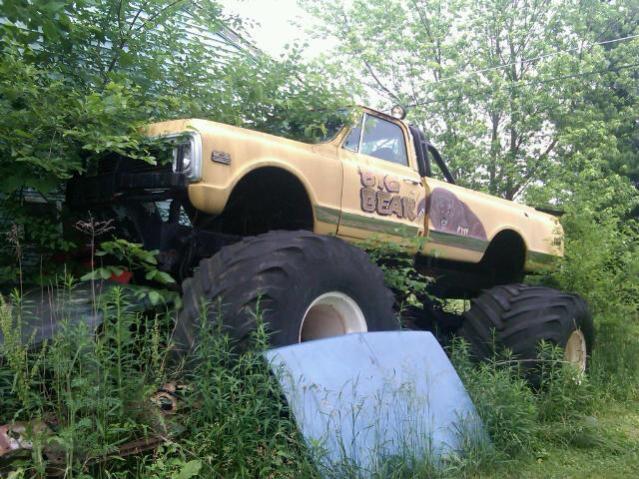 There’s just something about the current status of this abandoned “Big Bear” truck that’s both sad and intimidating. The weeds and shrubbery have grown around it so perfectly that it almost looks like it’s part of a horror movie scene. They should turn this area into a haunted maze of forgotten, abandoned Monster Trucks with surprise truck driver corpses popping out to scare people. 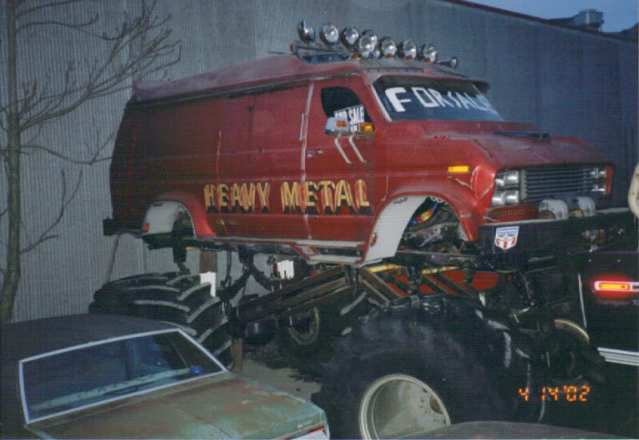 HAVE MERCY, I don’t even WANT to know what goes on in back of this “Heavy Metal” van. That’s right, even vans often times showed up during Monster Truck events. For some reason they remind me of that chunky metalhead bully that you had shop class with in high school. 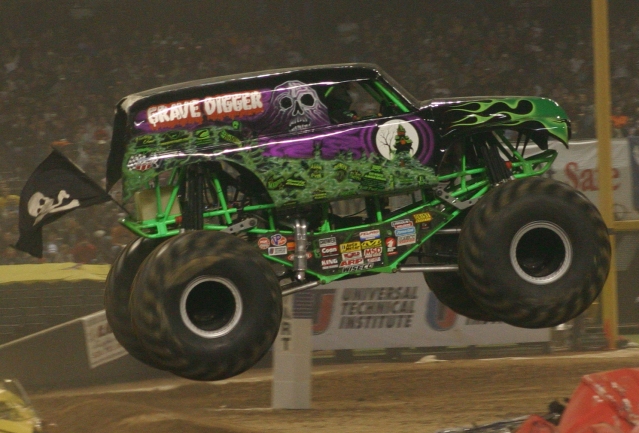 The main event of Monster Truck events was and still is the eerie beast known as “Grave Digger”. From what creator/driver Dennis Anderson can make a 10,000 pound vehicle do in the air to the mystique behind the behemoth, Grave Digger will never stop. In the Monster Truck universe it’s the equivalent of The Undertaker in the WWE.

The truck started off as a simple ‘mud bogger’ (an off-roading event involving 4×4’s) but after Anderson volunteered to drive the 1951 Chevy Panel Truck at a Monster Truck event after one of the scheduled trucks pulled a no-show, the Grave Digger saga was born. The truck was an instant success with Anderson’s aggressive and no-holds-barred driving style. He left the art of mud bogging to pursue a lifetime of Monster Trucks.

The truck got it’s name from when Anderson was trash talking with some of his trucker compadres’ and said “I’ll take this old junk and dig you a grave with it”, referencing the age of his old truck compared to their modern trucks. In 1986 the truck received its famous foggy graveyard paint job. The bloody lettering, green flames, ghost skull, haunted house and tombstones displaying the names of competitors are crucial features of Grave Digger and really haven’t changed much since its first incarnation roughly 30 years ago. For this we applaud Grave Digger. *(Look out for TNUC’s Spookiest Monster Trucks countdown, coming this October)*

Our #1 pick isn’t even a Monster Truck because it’s something far more loud and destructive. It’s the #1 Monster Truck voice-over commercial guy. The guy who could say something like “rubber baby buggy bumpers” and have you curled up in a fetal position on the couch holding onto your favorite stuffed animal with fear.

Not to discourage other voiceover people in the Monster Truck community, but there’s really only one master. I’ve been obsessed with this guy’s bloodcurdling voice for YEARS. Every time I’m driving down the street and catch one of his commercials on the radio I blast it as loud as possible. Unfortunately at this moment I could only find this one crappy video on YouTube, but the hunt for more is ON. I must find out who this demonchild is, where the dungeon he records this stuff is, how he got his voice to sound so demonic and finally, hire him to perform something exclusive for TNUC. If you disciples have any information regarding the ultimate Monster Truck voice-over guy, please consult Uncle T.

We hope you enjoyed reading about Monster Trucks. If you made it this far, you rule. Stay tuned to our Instagram for the upcoming #MonsterTruckMonday feature! (Thanks again to Monsterphotos.com)

← BE AFRAID, BE VERY AFRAID.
AUGUST’S LOST LEGEND OF THE MONTH: BILLY FROM OVERBOARD. → 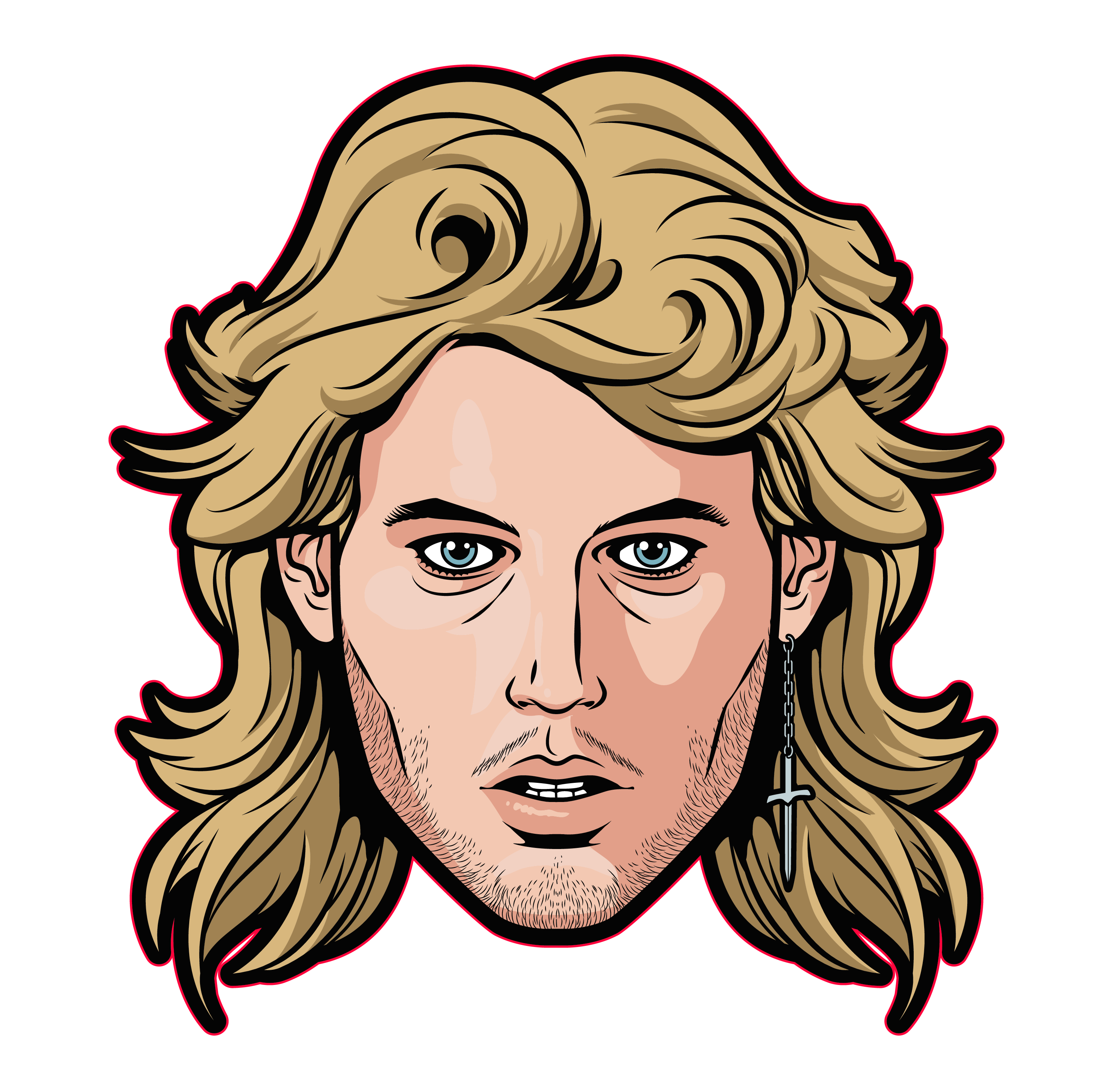 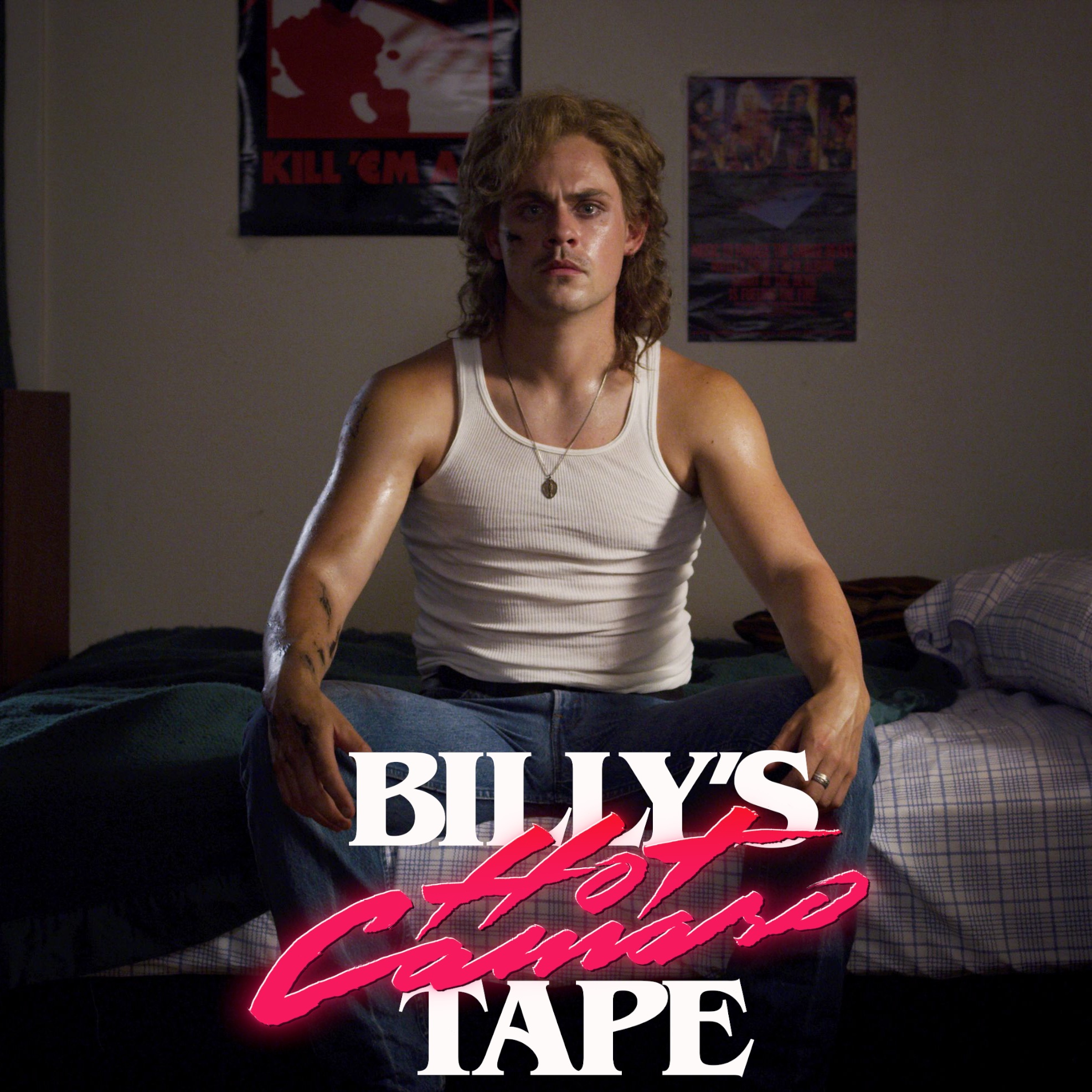 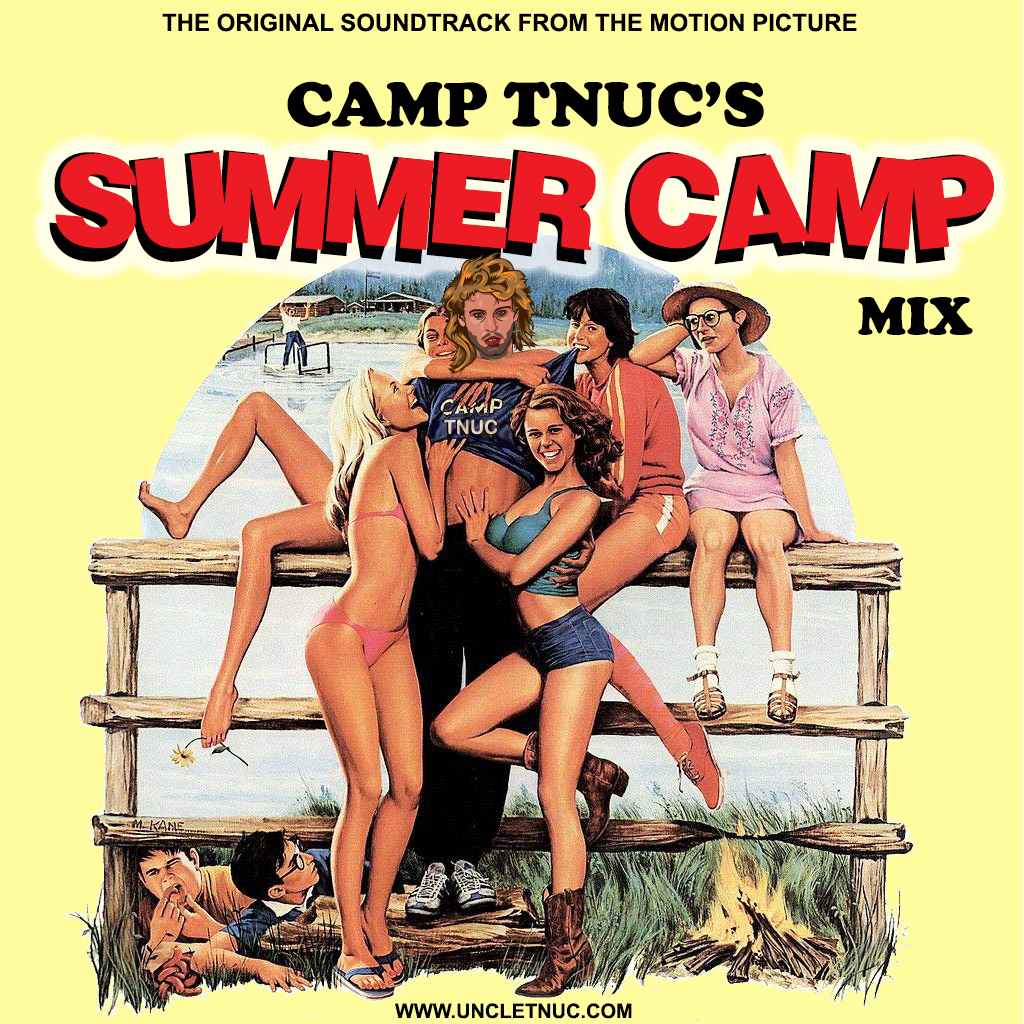