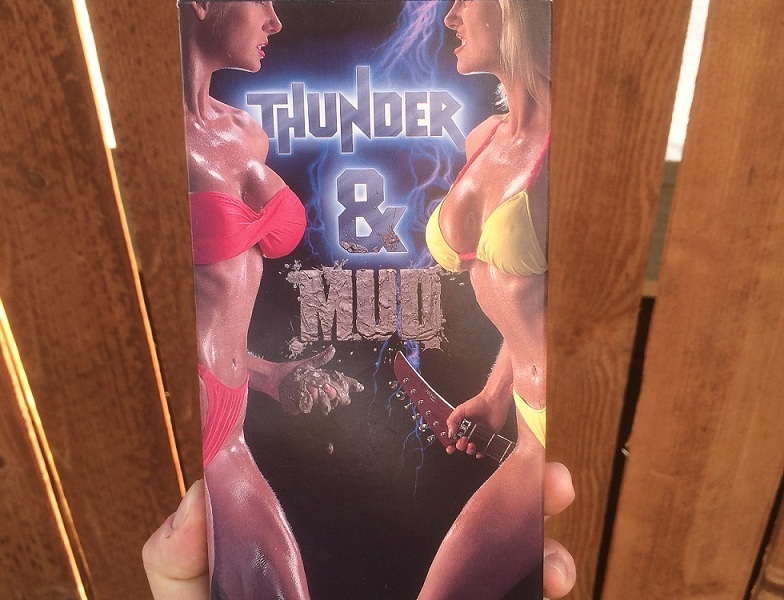 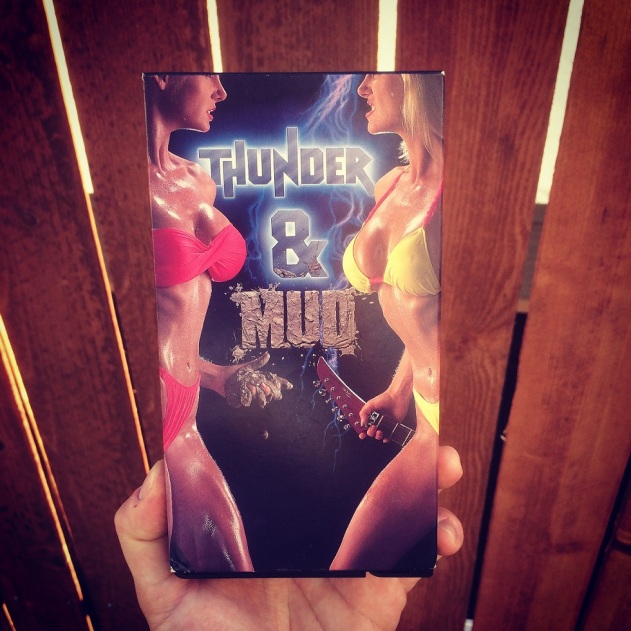 Feast your eyes on this prized piece. That gorgeous cover you can’t stop staring at had me dropping to my knees and begging for mercy in public, with nothing I could do about it. It isn’t every day I come across so many pristine attributes in a single product. Tanned hardbodies, suggested long butts, the guitar, the fistful of mud and bolts of lightning striking down on bolt-on mammaries! This ladies and gentlemen was a sight to behold. My expectations of the actual feature to equal the cover’s high quality were pretty slim. Still, this beast had to be mine. So last weekend I spread out on my rotating waterbed and began to venture down the culture-crossing road of heavy metal and mud wrestling with 1990’s THUNDER & MUD. 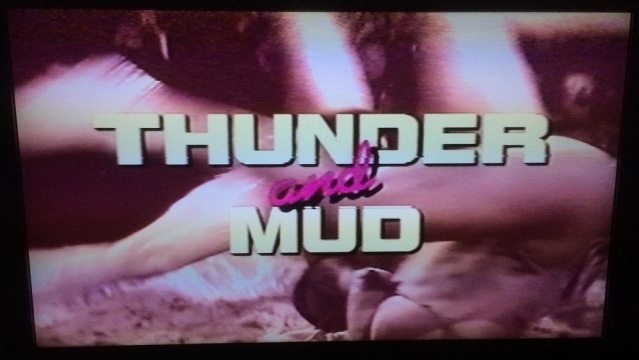 Wow. 1st note: What poet wrote this passage of golden literature from the back of the VHS? I’m interested in hiring them to deliver the eulogy at Uncle T’s funeral when he overdoses on quaaludes and Surge someday. 2nd note: Thunder & Mud was directed by Penelope Spheeris. That name should ring a bell as she was responsible for directing Wayne’s World, Black Sheep, The Beverly Hillbillies and The Decline of Western Civilization Parts 1, 2 & 3… 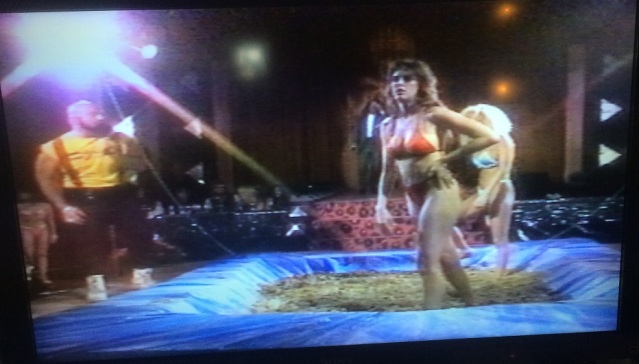 Get your mud flaps on and send the kids to bed!

What develops quickly in Thunder & Mud is a lethal dose of low-IQ entertainment that will blow your mind in a ‘brain turning into molten mush’ type of way. The “plot” involves a lineup of female mud wrestlers in a series of matches to fight for their their chosen band of the night. Those bands are failed late-eighties wanderers Grave Danger, Nuclear Assault, She-Rok, Tuff and Young Gunns. The event is called THUD and begins with a band performing a song followed by a 3-round match. These ladies are also fighting for the “Magnificent Union of Female Fighters” championship (an acronym that just so happens to spell out M.U.F.F.). 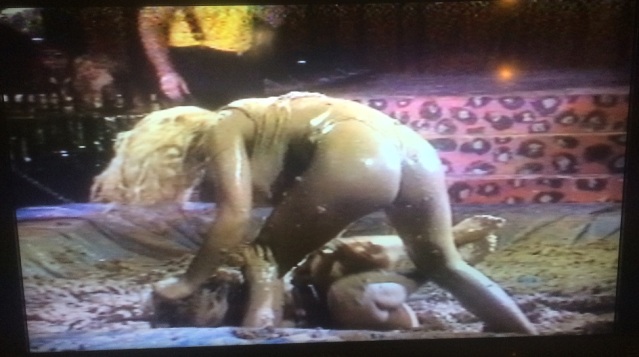 The mud wrestling matches pack just enough raunchiness to keep you enthralled for the duration of the fight. Each ravishing bimbo seems genuinely pissed at their opponent by screaming things like “slut”, “bitch” and “carpet-muncher” throughout the match. There’s no question that these ladies can brawl as each of them executes no shortage of hair pulling, body slamming, suplexing, clotheslining, leg dropping and face-to-mud smashing. During one of the final matches a girl twists her opponent into an impressive ball of body parts which had me really thinking she was going to snap completely in half. 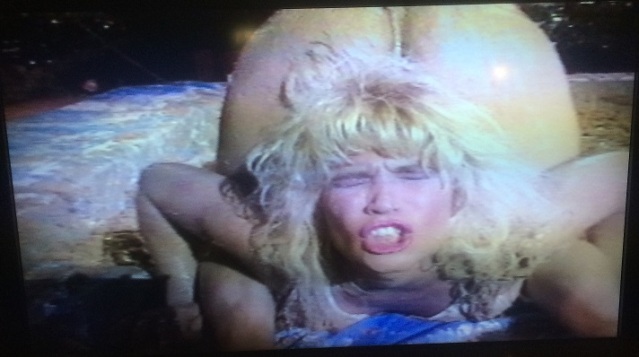 She is definitely not your coffee shop, vegan, Macbook-obsessed type of gal.

The spectators watching these distinguished women tear each other apart are probably the peak of excellence in the film. The crowd is a rowdy mix of long haired neanderthals and mud wrestling’s chosen disciples who are easily the horniest audience ever caught on film. They pound Löwenbraüs the entire show while headbanging and losing their minds every time a boob starts to emerge from a mud-drenched bikini top. Single earrings dangle viciously and tongues whip around in perverted gestures. Beer is shaken up and sprayed in the air like the’re toasting to the Gods and Goddesses of mud wrestling afterlife. The roof of the venue is torn off with levels of erupting horniness. In all honesty, their enthusiasm is infectious and would make anyone appreciate an excited crowd, regardless of what they’re cheering for. 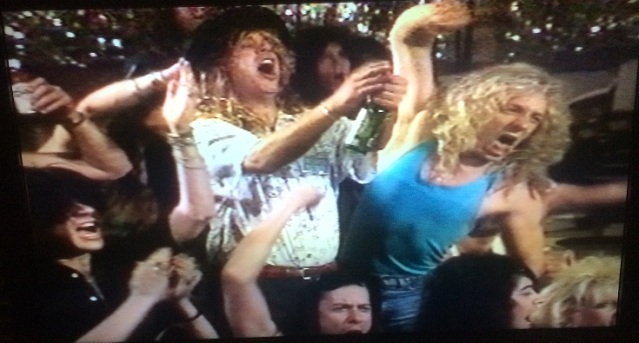 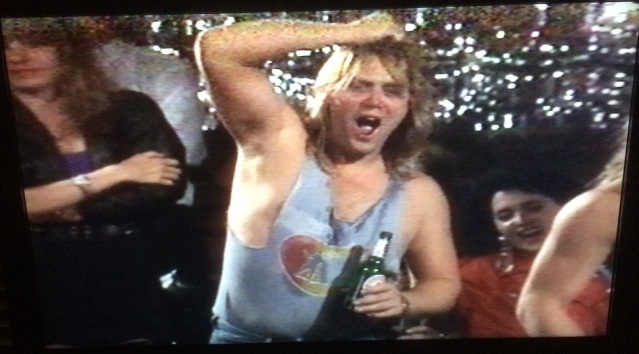 To put it respectfully, Thunder & Mud has a lot of heart but ain’t much for brainpower. But did I press the play button on my VCR expecting it to be a 90 minute chess lesson? No. So do yourself and purchase this slice of debauchery if you feel like raising a beer in the air and experiencing a seriously forgotten culture that I’m beginning to think only TNUC cares about. 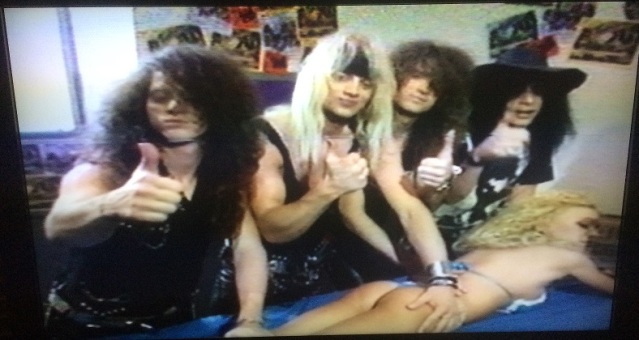 Backstage positive vibes with the band Tuff and one of nastiest mud wrestlers in the film! 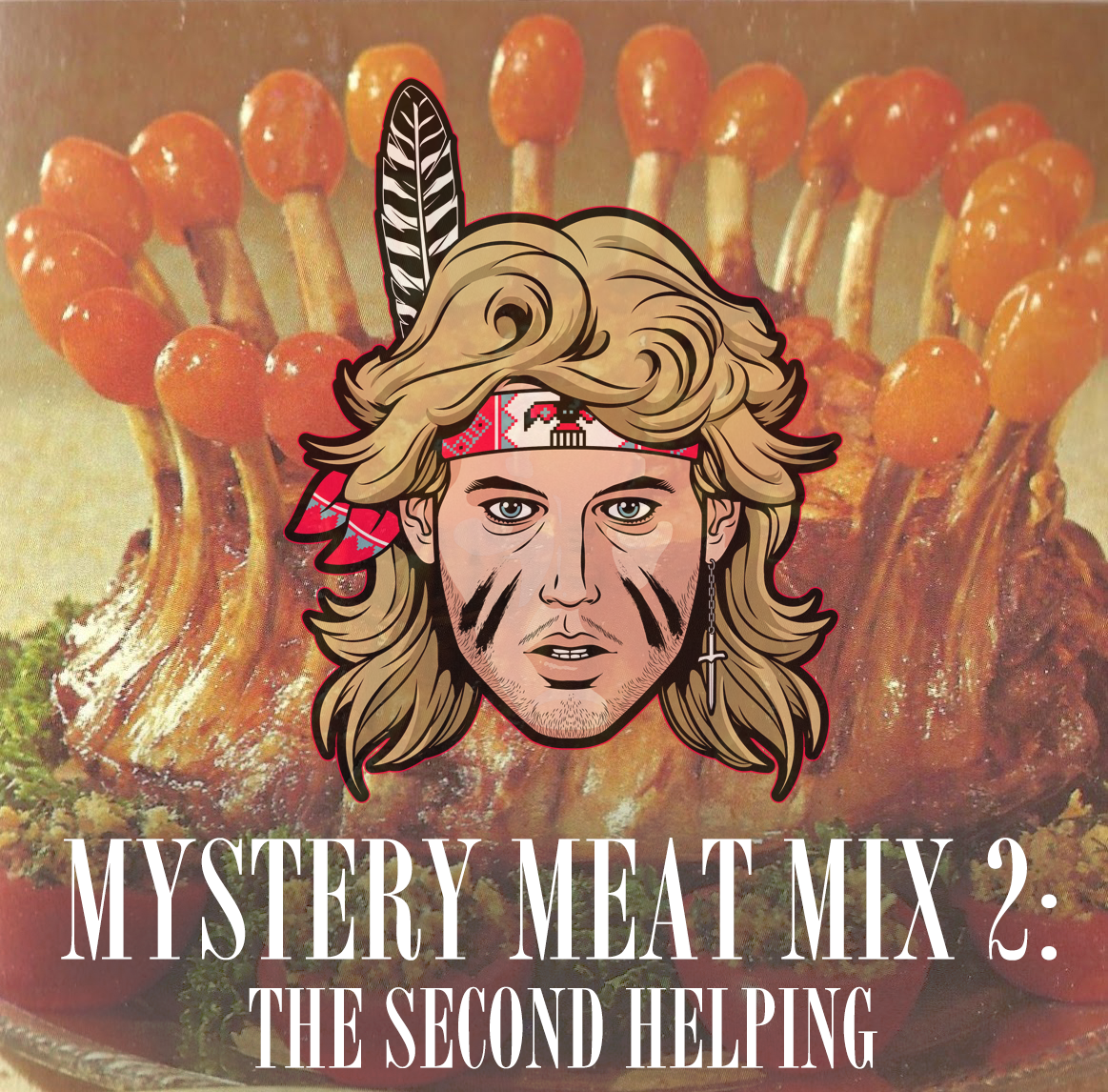 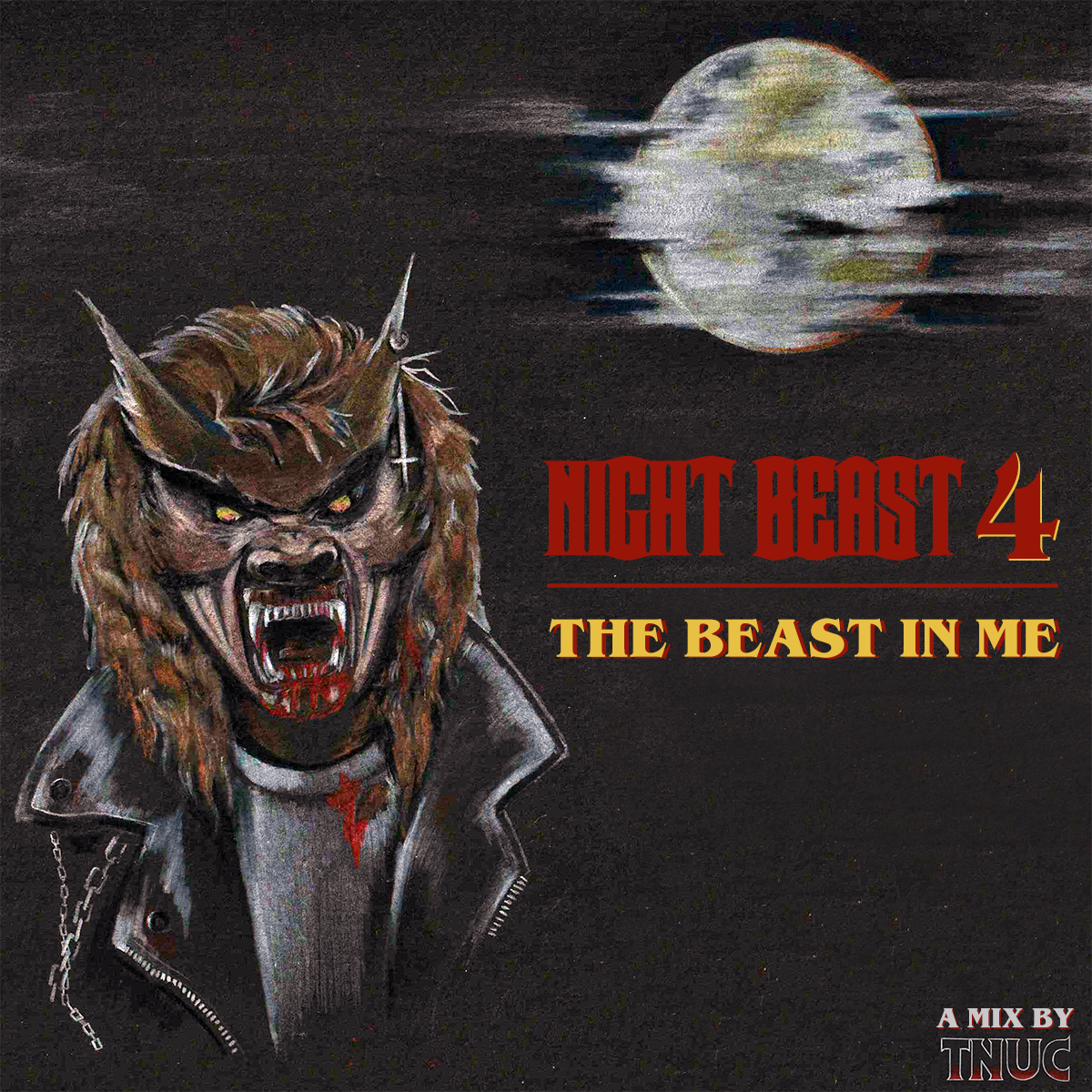