Every October at CAMP TNUC we can’t make it to the 31st without bringing up Ghoulies. Weather it be around a crackling bonfire, sitting on the toilet or listening to W.A.S.P., we can’t shut up about these tiny bundles of death. This year we’re going to switch gears for a change and spotlight their household cousins, the Boglins.

Boglins were rubbery fat creatures that you could control like hand puppets and move them around to make repulsive facial expressions. One of the coolest features of the Boglin were the boxes they were designed in. The boxes had cages in the front with bars that appeared to have been pried open, which suggesed that Boglins destined to be fugitives. Their flesh was made of this strange, flexible rubber material that literally felt like skin. If that wasn’t enough, they had glow in the dark eyes! Truly the coolest toys of all time, they even made skirt-chasing a high priority, as stated on one of their magazine ads:

Boglins love to meet girls. Especially little sisters. Try one and see. Boglins come alive in your hand. They’re squishy, squashy, squirmy and scary. And they come complete with their own cage! So look for Boglins. Then look for girls.

Sounds like a passage from the TNUC bible. The first run were released by Mattel in 1987 and became very popular. The timing was perfect given that the world was currently at the brink of the “little dudes craze” during this time (Gremlins, Ghoulies, Critters, Hobgoblins, Munchies, Puppet Master, etc.). This initial family of Boglins were Vlobb, Drool and Dwork, who’s pictured below…ready to get gnarly on that off-white sofa.

Printed on the back of each box were “Bogologist Field Notes”, which would explain some of the creature features of these obscure swamp dwellers…

After the boom of the “big 3” Boglins and a family of “Small Boglin Subspecies” being released, Mattel really went bonkers and took Boglins to a whole new, weird level. The US and Europe were introduced to “Soggy Boglins”, “Hairy Boglins”and even a line of tiny plastic Boglins that came with a toilet and can of slime! But these variations were all put to shame when the next Boglin would crawl in the room: the #1 Boglin all-star and the most sought-after of them all…”Blobkin” the HALLOWEEN BOGLIN. 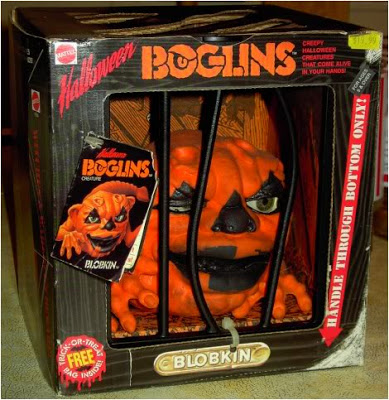 These bastards were part of the deluxe collection which features a second Halloween Boglin, “Bog O Bones”, who is equally as ruthless and difficult to track down. Ol’ Bog-O had a creepy, skeleton look going on that makes him a very stunning looking creature. Also included in their prison cell box was a trick-or-treat bag that I hear was big enough to consume a small child or two inside.

These overlooked classic puppets will always be dear to TNUC’s heart and if you’re an avid disciple of this blog and own a Boglin, maybe you could donate him to TNUC’s Boglin-dump?….a “donate-your-Boglin” charity case that will help enhance my Boglin Den. Hey…it was worth a try. I love these rude dudes.


“If you take us home, we’ll kiss your Aunt Martha, we’ll eat your peas, and we hope you know lots of girls”

← HOW TNUC SLEEPS EVERY NIGHT.
SAVINI. →