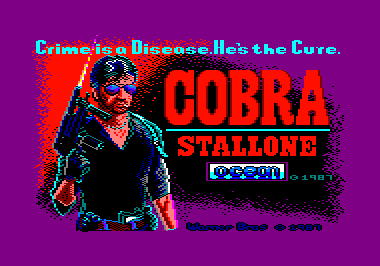 Today TNUC begins assaulting you with VIDEO ARMAGEDDON. This will be an on-going feature on the site, spotlighting forgotten and short-lived video game wonders.
In 1986, the same year the film hit theaters, Cobra was released by Ocean Software for the video gaming system Commodore 64. Ocean Software was notorious for releasing video game adaptations of films. In the game, you are Marion Cobretti and your mission is to protect top fashion model Ingrid Knutsen from the ruthless maniac known as ‘The Night Slasher’. You begin the game with no weapon and are forced to head-butt whoever comes in your way, which sends them flying across the screen. Weapons are hidden inside hamburgers which enables you to pick up either a knife, pistol or a vicious laser-sighted machine gun.

Due to a rush during its release, the game only features three levels. Because of this, there is no final boss to fight in the end of the game so once the three levels of the game are completed, the game repeats! The levels, or “playfields” are CITYSCAPE (night-time), COUNTRYSIDE (day-time) and THE FACTORY.
The best part of the game that I can see from here is the music score which was created by Ben Daglish. Play the clip below to hear how he arranges the classic Sylvester Levay song from the original film, ‘Skyline’. A link to a download of the original track from the movie is below the clip.